It never fails to amaze me how many things are being promised by presidential hopefuls without telling us exactly how we are going to pay for all of it. If you believe “The Donald,” Mexico will at least pay for the wall (which of course is not going to happen), and if you are feeling “The Bern,” the 1 percent will pay for most of it — never mind that his proposed tax reforms will not pass unless Congress shifts to a Democratic majority.

The stark reality is quite different. It is you and me who are going to pay for it – unless we irrationally continue to drive the growing deficit into new stratospheres, in which case Trump as president would come in handy since he could use his experience to bankrupt the country and leave investors and debtors hanging…

The rise of Bernie Sanders and Donald Trump’s popularity is rooted in the same truth: A large part of the population feels that the system is rigged against them and unfortunately, they are right.

Let’s take a look at our current tax system and who is actually paying the bill: 40 percent of American households pay no federal income taxes — but they may pay local and state taxes, sales taxes and payroll taxes (to support Medicare and Social Security).

Back in 1935, the share of the total federal income tax revenue between corporations and individuals used to be 50-50. Since then, the corporate portion fell to 23 percent in 2005 and is estimated to be 19 percent in 2015, mostly due to lower corporate taxes but more disturbingly because U.S. corporations started sheltering large parts of their income and cash holdings abroad. (However, keep in mind that with each payroll deduction from a wage, every company writes a check in the equal amount that goes to support Medicare and Social Security.)

Two decades ago, the tax rate for the 400 highest earning U.S. taxpayers used to be 27 percent. In 2012 — when Obama got re-elected — it has fallen to 17 percent. It is the hard-working middle class that is paying the majority of the federal taxes, because the lower-wage earners don’t contribute and because companies and billionaires found clever ways to minimize their tax load.

So what is the solution? How about some of the following: 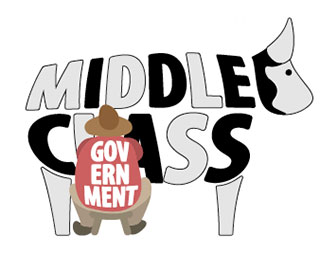 To be clear, as an entrepreneur who puts his own money at risk, I’m very much a capitalist. But considering that the economy has doubled in the past three decades while wages have stagnated and the minimum wage is still at 1968 levels, it has become evident that the creation of wealth has very much benefited the top few, while at the same their share of the tax burden has decreased. A sustainable democratic free market system has to be fair and benefit all contributors, not just a few. We have to find a balance so that the tide can lift all boats.