Who among us hasn’t dreamed about trying our hands in the beverage industry, spending our days taste-testing the latest and greatest spirits? You may think it’s all free booze and parties, but just ask Hilton Head Island resident Tim Grovenburg, co-founder of Brass Ring Spirit Brands, and he’ll tell you: it’s all about hard work and dedication.

You can’t tell America’s story without telling the Gullah story.

Run by the Campbell family since 1996, this Hilton Head Island company strives to educate the public about the island’s rich Gullah heritage, traditions and place in America’s history. The desire to preserve Gullah traditions is the heart of their mission. The roughly 15 members of the family involved in the company span more than three generations.

For decades, the Federal National Mortgage Association, or Fannie Mae, and the Federal Home Loan Mortgage Corporation, also known as Freddie Mac — both publicly traded companies — have expanded the availability of home mortgages by “packaging” the loans into mortgage-backed securities that investors can buy. This practice has allowed lenders to reinvest most of their assets and offer more loans. The financial backstop for Fannie Mae and Freddie Mac had always been an “implied” obligation of the U.S. Treasury to ensure that they would not be allowed to fail.

The old saying that “blood and business should never mix” was probably coined by someone who spent too much time with his or her loved ones at work and at home. But while owning and running a business can be difficult, the commitment that family members bring can be unparalleled. And working together can be a way to spend quality time with love ones and make memories. 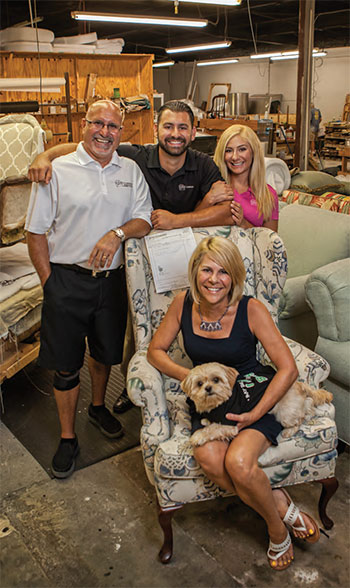 As with any enterprise, the strength of the business model is key. The best recipe for success often includes a firm desire to involve family members from different generations. The families behind two Hilton Head Island businesses—Just Cushions and Gullah Heritage Trail Tours—embody this spirit of collaboration.

With all the talk and activity in Washington, D.C., these days around issues like tax reform, I thought it might be interesting to look into the subject of the mortgage interest deduction. What was its origin, how is it used, and what is its future?

Federal income tax in the United States was first implemented in 1894, and all forms of interest on loans were deductible. Interestingly, the U.S. Supreme Court quickly ruled income taxes unconstitutional and it wasn’t until 1913 that Congress enacted a new income tax, after the Constitution was amended, and as part of this new tax interest was again deductible. In the early years of the tax code, it was safe to presume that Congress wasn’t thinking about mortgage interest deductibility, as homes in those days were generally bought for cash. Presumably, lawmakers were more concerned with mortgages on farms and business loans.

Hilton Head Island entrepreneur Kelly Stroud Spinella has fond memories of her childhood in Chesterfield, Va. Some of her favorite moments were fishing with her father on Lake Chesdin, something they would do together just about every evening at dusk.

“It was our time together,” Spinella said.

She went to Atlanta for college, Knoxville to teach and Nashville to practice law.

But then her father, Chuck Scarminach, managing partner of Novit and Scarminach, called in 2011 with an offer that gave her pause.

Try to name a business where exceptional customer service doesn’t make a difference. With all the news about United Airlines and Dr. Dao, a sometimes Hilton Head Island resident, I thought I would examine this idea of what customer service is all about.  The “Success Center” defines customer service as “the support you offer customers – both before and after they buy your product – that helps them have an easy and enjoyable experience with you.  It’s more than just providing answers; it’s an important part of the promise your brand makes to its customers, and it is critical to the success of your business.”

On March 15, the Federal Open Market Committee, or the FOMC, raised its benchmark rate for the second time in the past three months. This move might not normally get your attention, but since this was only the third increase in the past nine years it is truly notable. The “Fed Funds” target rate now stands at a low range of between .75 percent and 1 percent, still at a level considered anything other than a stimulant to our domestic economy.