The town has joined with Clemson’s Institute for Economic and Community Development to create a “technology village” in Bluffton. The goal of this nonprofit public/private three-year pilot program is to diversify the local economy and create a breeding ground for technology companies, which would translate into new businesses and new jobs in Bluffton.

Not to undermine the importance of financial and investment planning during the other 11 months, but for the most successful investors, January is the month to really step up your game. The hardest part is narrowing down the full width and breadth of fiduciary possibilities to the most important goals. If that’s the case, consider the following a “goal mine” of resolutions to get you off to a profitable 2012.

With the opening of Station 300 this month, Bluffton doesn’t just get a place to hurl a few rocks. In the short term, it gets an entertainment mecca that pumps money into the local economy. In the long term, it gets the chance to establish itself as headquarters to a new chain of entertainment megaplexes.

After three years of planning, a $7.3 million entertainment facility is opening this month on Buckwalter Parkway. And while Station 300’s emphasis may be pinned on bowling, the owners have a broader game plan.

“This is not your father’s bowling alley,” said managing partner Gary Trimm. “The idea is to have more than bowling.”

There will be plenty more, and, yes, dad is invited too.

In addition to “high-tech” bowling, the 33,000-square-foot facility at Buckwalter Place will have a large arcade, a sports bar, an upscale dining area with indoor and outdoor seating and party rooms.

And the owners have spared no details to make the experience an interesting one.

From “Cosmic Bowling” — where balls glow beneath black lights and a light show is set to pulsing music — to large flat-screen TVs at each station, odds are bowlers haven’t seen anything quite like it. While there are about 6,500 bowling centers nationwide, only about 120 have these high-tech toys and this one will be a first for the Lowcountry and surrounding region, Trimm said.

He’s hoping it will draw customers from across Beaufort and Jasper counties and the Savannah area, bringing an estimated $3 million into the town each year. It will employ seven to nine full-time workers and 40 to 50 part-timers, with an annual payroll of about $750,000.

Generating an income is what inspired Trimm and another partner, Gary Brust, to get rolling in the first place. Shortly after retiring to Hilton Head Island, Trimm felt the economy slipping into the gutter and he needed a new venture to secure his future, one not tied to the stock market.

He was intrigued with the growing popularity of high-tech bowling and thought such a center would be perfect for Bluffton’s demographics of retirees, families and college students. Brust helped find other partners.

The center will be open 365 days a year and, with so many local retirees, Trimm hopes it will stay busy during the afternoon while attracting adults at night and children and families on the weekends.

And that’s just the start. Eventually, the owners would like to work with other developers to expand the complex into an entertainment district.

They also hope this is the first of several bowling centers they will open in coming years, with their headquarters in Bluffton.

“Right now our focus is getting this one up,” Trimm said. “We think we can replicate it in a number of areas.”

Station 300’s grand opening is Jan. 20-22, but its doors open Jan. 7 to give the staff time to work out any bugs before the official launch.

The Lowcountry is home to a number of businesses that started on local grounds, but have expanded upwards and outwards to open locations outside of their Beaufort County homelands. Here are just a few.

“But it’s a little too seasonal here,” Coleman said from his mountain retreat in Blowing Rock, N.C. “You know THE blowing rock? I’m looking out at it right now. But I had to put on a sweater this morning.”

Coleman and his partner, Marc Puntereri, started The Cypress of Hilton Head in 1992 and have since opened high-end continuing care communities in Charlotte, Chapel Hill, (where Coleman graduated from UNC) and Raleigh. (The Chapel Hill community is called The Cedars.)

But when he first launched The Cypress of Hilton Head, Coleman didn’t foresee the success of the company outside of Beaufort County. “I had been involved with other developments, including Hilton Head Plantation, Indigo Run, Main Street and a few golf courses, but I realized that the continuing-care retirement field was enjoyable, so I shifted my focus” he says. 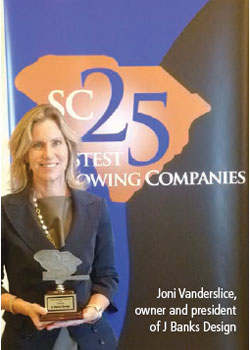 CareCore, which has offices in Bluffton and Colorado, came in at No. 7. J Banks placed No. 14; owner and president Joni Vanderslice (pictured) was on hand to receive the award, the first presented to an interior designer. CoastalStates, at No. 25, appeared on the list for the fourth consecutive year and was the only bank represented. 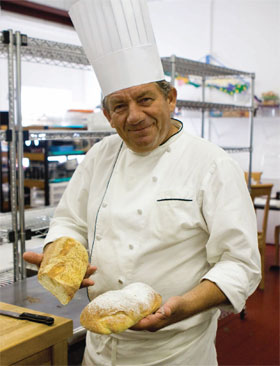 “At culinary school, often you learn only how to bake from mixes. But anyone can learn to prepare healthy food from scratch, and this is what I want to change.”

There are many places in which that might be seen as a contentious remark, but addressing the bad press bread tends to get these days (“A disaster!” Plantadis says) is one of the tasks he’s set for himself in America. “In Europe, people eat bread all day long, and it’s not a problem for anyone,” says Plantadis. Here in America, he continues, the problems are all in the ingredients and methods, and in the difference between mass production and artisanal baking — which, as you might guess, is a stark one.

How Outside Hilton Head rose from humble beginnings to a five-part success — with its own island. 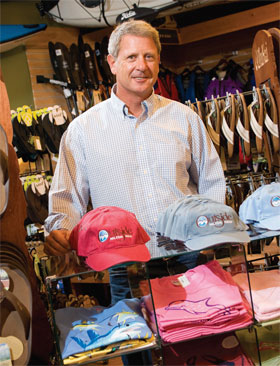 Even with all his creative might, Mike Overton could have never imagined that the little part-time windsurfinginstruction business he started on the south end of Hilton Head Island would one day become the sprawling, multifaceted company known as Outside Hilton Head.

The 52-year-old Washington, D.C., native was a long-haired college student at the University of Vermont in 1979 when a dinner conversation with a Hilton Head resident planted the idea for a company that taught tourists how to windsurf. That conversation turned into a partnership, and Overton and his then-partner named their fledgling business Sailin’ Shoes, after a song by Little Feat. The partner soon changed course and moved to Vermont, but not before convincing Overton to give the beach idea a shot. 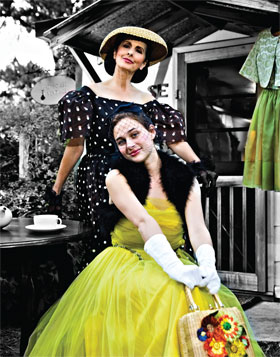 An old town Bluffton shop is bringing back a mad love for vintage looks.

On the Facebook page for her store, Madhouse Vintage, Caroline Noble sends out regular pop quizzes to her style-obsessed followers. “Tell me who you think wore this and when?” Noble asks about a 1970sera cotton sun dress, a full-length, sleeveless pink-and-green daisy print number with an empire waist (tied with a pink ribbon) and a scoop neckline. Its label reads: “The Daisy Pot – Honolulu.”

Some of Noble’s hundreds of followers begin to weigh in, guessing Elizabeth Taylor or Doris Day. But before too long, island resident Lindy Ellison Russell, wife of entertainer Gregg Russell and co-founder of Hilton Head Heroes, posts that she once owned the dress — and wore it to a Jimmy Buffett concert in Miami. Just like that, a Madhouse Vintage vignette is born. 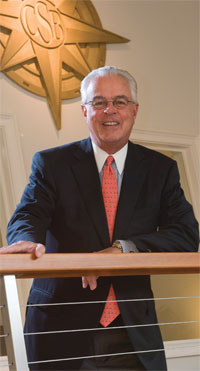 How do we get things back on track? CoastalStates Bank chief Jim MacLeod says the answer is in continued government backing and increased lending oversight.

With a housing, mortgage and finance crisis still gripping the country and the national economic fabric in tatters, it’s time for a return to less conservative lending, an equilibrium in residential financing and an abandoning of fear, says CoastalStates Bank President and COO James S. MacLeod.

Fresh from a housing financing summit in Washington, D.C., MacLeod is full of ideas and determination to get nation back on its feet. But, he cautions, “it’s probably going to be another year or year and a half to get the fear out of the market.” 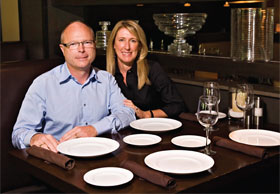 With three successful local restaurants and a nationwide expansion on the way, Price and Karen Beall share their fresh formula for food — and business.

I t’s safe to say that restaurateur Price Beall has always been involved with his two passions: food and wine.

Beall and his wife, Karen, are the masterminds behind Truffles, which has expanded to three locations and become an institution in Lowcountry dining — and is now looking to translate that success all across the country. “Truffles has been a work in progress,” Price said.