Freedman, a Connecticut native, was working up a cable TV deal in Poland when his brother called from Charleston and asked him to join in acquiring “a bankrupt marina.” 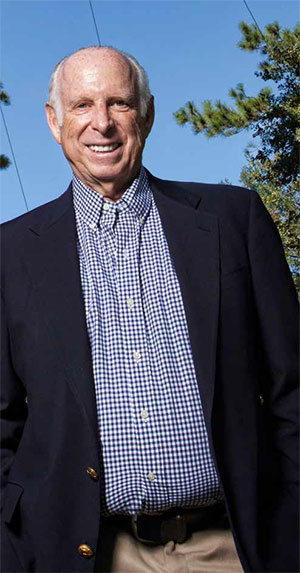 As simple as that.

The purchase became a passion project for Freedman, who transformed the marina with a multi-million-dollar renovation. The marina offers 53 wet slips for boats up to 55 feet, and two slips for vessels up to 100 feet. Dry storage can handle boats up to 35 feet in length.

Over the years, Freedman added a restaurant and an outdoor recreation area that includes a zipline, a ropes course and a restaurant. His footprint tripled to some 15 acres from an initial purchase of about five acres.

And now – after four years of planning and problem-solving – the waterfront fun spot plans to roll out Hilton Head’s first go-kart track.

With the go-karts, Broad Creek this year also added a food truck and a new name.

“Rebranding emphasizes that we are all-encompassing,” Freedman said.

For Freedman, now 76, the development has been a labor of love, rewarded by growth and popularity. Broad Creek has come a long way since he bought the property — sight unseen — on his brother’s recommendation.

“We had done other deals together and this turned out to be pretty good,” said Freedman.

His brother has passed away, and Freedman has continued to own and enhance the Broad Creek property.

“At some point, I knew I wouldn’t want to totally retire,” he said.

Far from it. Adventure Hilton Head has become an evolving, must-see getaway for residents and visitors.

The 1,250-foot go-kart course will include a fleet of 64 electric go-karts.

The laid-back restaurant Up the Creek Pub & Grill sits at the water’s edge. And new this summer is the “Paddles!” food truck.

In the early 2000s, Freedman flirted with bringing residential housing to the site. Those plans were scotched when the U.S. housing bubble burst in 2006-08.

Instead, he turned his energy and creativity to making the area a fun-filled port of call.

“The best part is making an impact on people who live here, as well as tourists,” Freedman said. “We have the most unique attractions on Hilton Head.”

In 2012, he opened the ZipLine Hilton Head to provide an above-the-trees adventure with seven ziplines, including a dual cable racing zip finale. Rising above the marina is the ZipLine’s 75-foot tower.

The treetops experience was a fresh idea from a fellow who had never been on a zipline and confesses to a fear of heights.

“I’m a pilot and downhill skier, but I developed a peculiar fear of heights in certain circumstances by riding up and down construction elevators on the exteriors of buildings under construction,” says Freedman.

Freedman said he was walking the Broad Creek property when a business acquaintance asked: “Do you know what a zipline is?”

At that point, Freedman had not experienced one of the overhead thrill rides.

True to his business discipline, he researched ziplines in Georgia and North Carolina, getting familiar with the ride’s breath-taking rush. 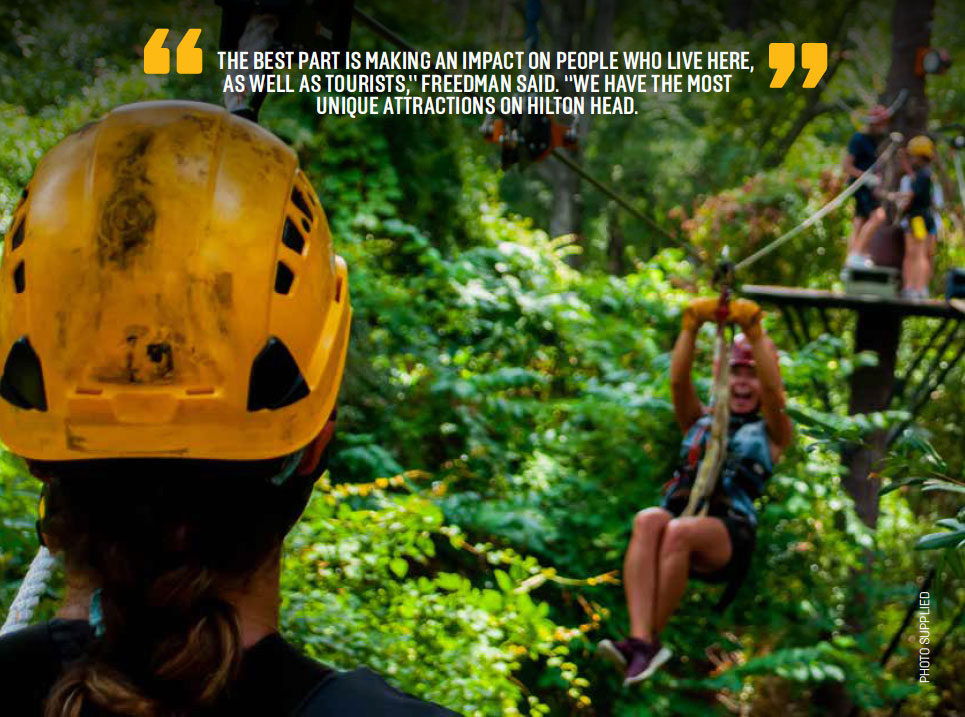 Freedman followed the ziplines with Aerial Adventure, a collection of rope challenge courses and 50 fun obstacles.

More than 100,000 guests have been served on the ZipLine and Aerial Adventure.

Bringing go-karts to Broad Creek proved a bumpy journey for Freedman, whose plans collided with nearby residents concerned that noisy vehicles would disturb their relaxed lifestyle.

A solution was found in electric go-karts – sort of first cousins to golf carts.

“It’s not much different than what you hear at a shotgun start at your local golf course on a Saturday morning,” said Nate Jones, vice-president and general manager of Adventure Hilton Head.

Noise abatement was among a handful of obstacles to overcome to charge ahead with electric go-karts. Freedman and his team powered through a gauntlet of zoning and planning issues before securing government approval.

The Covid pandemic presented other challenges, including scarce construction labor and supply chain issues that disrupted go-kart manufacturing. Plans for a June opening have slipped into September. 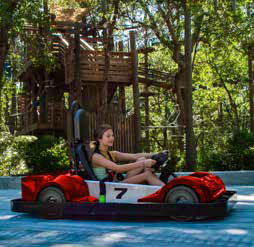 “There have been significant issues due to supply chain problems,” said Jones. “But it has given us a chance to refine the project and ensure that the guest experience will be of the highest quality.”

The progress and activities at Adventure Hilton Head are under the guidance and watchful eye of Jones, a Hilton Head native with a degree in hospitality, tourism and business administration. Before answering a classified ad 12 years ago to work with Freedman, Jones worked at a Charleston marina and spent two years as captain of a privately owned boat in Tampa.

His knowledge of tourism, boating and business proved a good fit for the father of two young children.

“This is exciting and the response from the community has been great,” Jones said. “Mr. Freedman’s vision is for Adventure Hilton Head to serve the locals and visitors. It’s a great niche for young families looking for great outdoor activity.

“We’ve expanded, expanded and expanded. What we’ve grown, I am very proud of.”

“My life has been blessed with many great experiences. Hilton Head Island, and its people, are a rich part of that.”