After a short “retirement,” Senior got the itch back when Vic Roof Jr., affectionately known as Bubba, graduated college. The two took their old-school knowledge and next-generation passion for design and created Sea Hunt Boats in 1995. The company is based in Columbia.

The goal was simple for Bubba: give the next-generation angler what they weren’t getting.

“We build family fishing boats,” said Sea Hunt National Sales Manager Robbie Coates. “Our Ultra series, our best-sellers, it’s an acronym for what we’re all about. Ultimate lifestyle that’s really affordable. It’s got the seating for the family, for the kids, for the tubing and the watersports, for pulling up on sandbars or docking at restaurants. Bubba got that we can build a boat that serves the hardcore fisherman and the family that wants to be on the boat, too.” 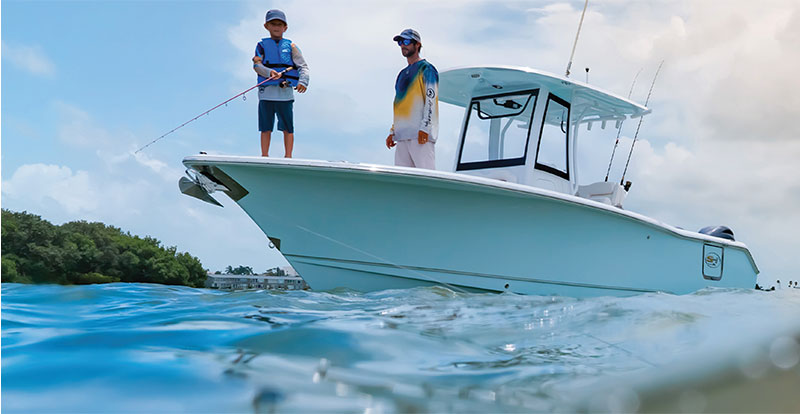 The result was an industry-changing innovation, a saltwater center console boat with extra bow seating, back rests in the bow and extra leg room. It’s the type of genius you see on “Shark Tank” and say, “I wish I’d thought of that.”

Father and son started with a 15-foot boat and soon expanded to 17- and 19-footers. Their 23-foot model catapulted Sea Hunt into the boating elite. The company now builds four lines of boats ranging from 18 to 30 feet and within that market have become the No. 1 center console boat in the world in that size range for 16 straight years.

We’re not talking about taking over the industry with volume or boat size. The Roofs have always focused on innovating within one mindset — combining the fun of a pontoon with the fisherman’s needs of a center-console boat. The Ultra series is the most family friendly with a full backseat. The Gamefish, Triton and Bay Extreme series are all more specifically tailored toward fishing but still account for family time.

Vic Sr. has retired, but Bubba has kept his Dad’s ideals fully intact. The company has not computerized design. The new looks are designed by Bubba and a small team of engineers. New design tweaks are the product of discussions between Bubba, customers and his network of dealers from New York to the Florida Keys and over to the Gulf of Mexico and Texas.

The company has ramped up production out of its 170,000-square-foot facility while always keeping the laser-sharp focus on quality.

Sea Hunt has around 30 total dealers, with The Boathouse on Hilton Head Island being the Lowcountry’s lone dealer.

Each of the dealers is clamoring for more boats, but Bubba has toed the line at no more than 2,200 boats produced per year. Roof, now 49, is at the facility at 5:30 a.m. each day and inspects every boat before it heads to a dealer. 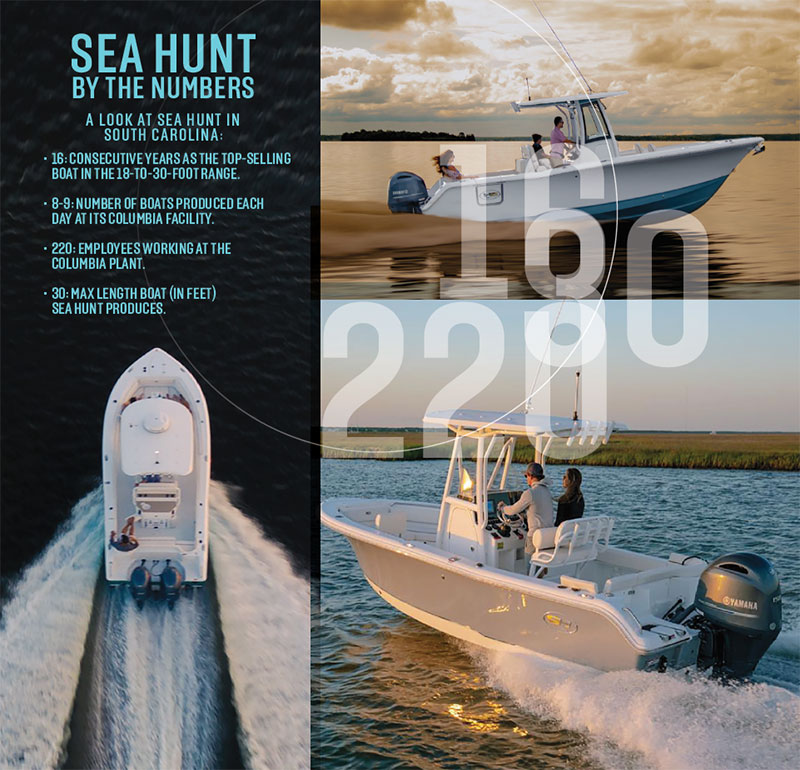 The signature of a Sea Hunt — sharp bow drops, big dead rise, smoother ride —is achieved on a drafting board, then a wood plug and finally, a fiberglass mold. Competitors have tried to replicate the process with mass production but boaters know a Sea Hunt when they see it hit that first heavy wave.

The company has stayed equally focused on their commitment to giving back to both the Columbia region and the state, thanks to strong charitable donations to area schools, the Harvest Hope food bank and the Coastal Conservation Association.

Many competitors have graduated to building 40-foot boats and beyond with robots, but Roof and his crew have a mentality Lowcountry boaters can relate to: speed can be achieved with a slow and steady commitment to unwavering customer satisfaction.

SEA HUNT BY THE NUMBERS

A look at Sea Hunt in Columbia: