Her body felt broken, and her faith was shaken.

The only thing that could cut through the darkness was the flame of a candle, which Angie would burn each evening while she read and reflected. It was a rare moment of Zen in a suddenly chaotic and frightening world. 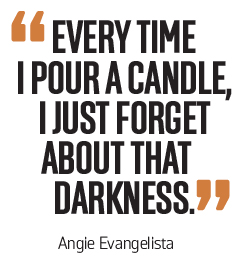 “With that very simple act of lighting a candle, it gives me hope,” Angie says.

She would sometimes break down and cry, letting go of the overflowing of emotions. Catharsis by candlelight.

Candles became a critical part of her self-care regimen. And if they could make her feel better, even in spite of the circumstances, maybe they could do the same for others.

She decided to try her hand at making her own and ordered a kit online, using her mother’s credit card to delay breaking the news to her husband, Leo.

Sometimes it’s better to ask for forgiveness than permission.

“He came home and was like, ‘What is that smell? What are you making?’” Angie recalls.

Leo was skeptical, but Angie persisted.

What started as a therapeutic hobby, pouring candles to give to friends and family as thank-you gifts for their outpouring of support, quickly grew into something more. The recipients loved their candles and wanted more, and they were willing to pay for them. 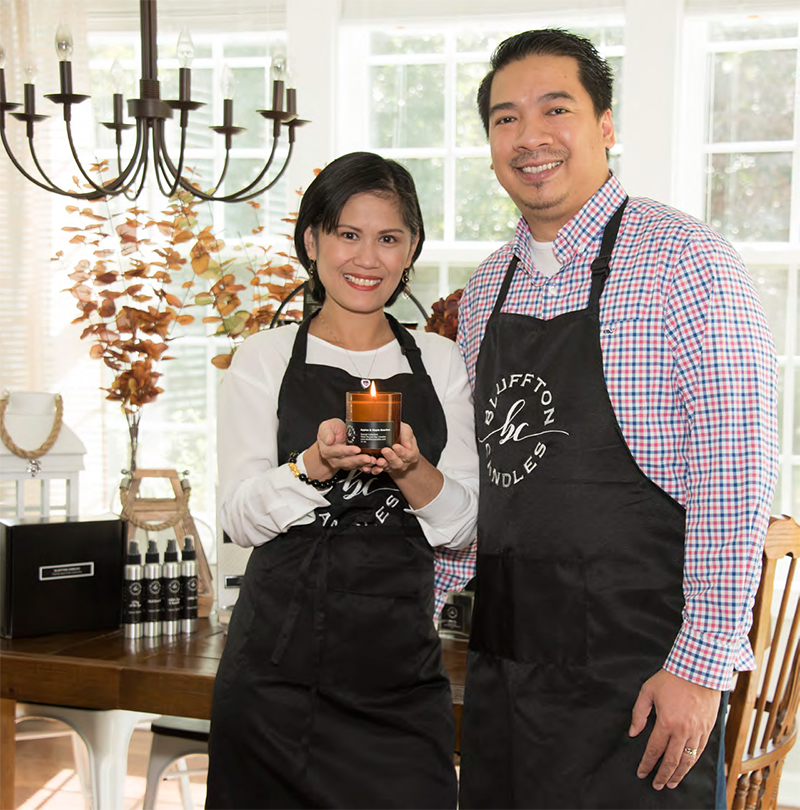 Angie kept making candles, and Leo, a mortgage lender at a Bluffton bank, took over the business side of the operation. Bluffton Candles was born.

The initial product looked nothing like the sleek, polished line the couple produces now. The first iteration of Bluffton Candles was pink-centric in homage to Angie’s battle with breast cancer, but after receiving valuable feedback from retailers they solicited to sell the candles in their shops, the Evangelistas went back to the drawing board.

Although the all-natural, hand-poured soy candles remained the same, the rebranding made all the difference. It stripped away the story and put the focus squarely on the product — and as it turns out, the product sold itself. When the couple told new buyers their story — after the deal was done — it only heightened their affinity for the product.

Soon, Bluffton Candles was in shops throughout the Lowcountry, local businesses were placing orders for client appreciation gifts, and the Evangelistas partnered with local charities to produce candles for fundraisers. They also hit sold at the Bluffton Artisan Market, often enlisting the help of their 8- and 10-year-old sons. 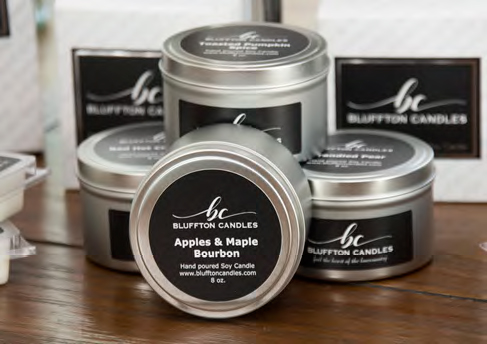 Hand-pouring candles is a time-intensive process, so Angie was pouring 50 here and 50 there on weeknights after work at the Hilton Head Marriott Resort & Spa and making large batches of up to 200 on weekends.

At the one-year anniversary in March, Bluffton Candles was a rousing success, even if the Evangelistas tried to take things slow while working full-time jobs. Then the COVID-19 pandemic hit the United States.

Most of the stores that had agreed to carry Bluffton Candles’ expanding product line closed in March, sending the Evangelistas scrambling. They launched an online store in April to keep the business afloat and have taken advantage of outdoor markets to stay relevant. The shift in gears also allowed Angie to launch a line of reed diffusers to complement their popular candles and room sprays.

The couple has a page on their website where customers can find codes to receive 10 percent off their order and ensure a portion of the proceeds go to the Hollings Cancer Center at MUSC, the Boys & Girls Clubs of Northern Beaufort County and Jasper County, or Bluffton Self Help.

For Breast Cancer Awareness Month in October, Angie is also producing a limited edition candle to raise funds for the Hollings Cancer Center, as well as a special “The Warrior’s Journey” candle to be given to breast cancer patients at MUSC.

“Every time I pour a candle, I just forget about that darkness,” Angie says. “I’m in remission right now, but every time I light a candle it gives me hope that I'll be fine no matter what and people are there.”