“Over 50 of them came out for the reveal, lined up and saluted him as he walked into his place and into his room,” Holly recalls of that first makeover. “That was definitely when Pete and I looked at each other and said, ‘Wow, this is definitely something we were meant to do.’” 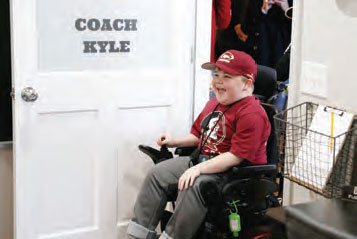 Since then the Ranneys, of Atlanta, Georgia, have started their own nonprofit organization, Sunshine on a Ranney Day, through which they’ve completed more than 50 projects within 60 miles of downtown Atlanta — free makeovers of bedrooms, therapy rooms and bathrooms for kids who are either gravely ill or have special needs, giving families under incredible stress a huge home blessing and a new reason to smile.

“We didn’t know anything about children with illnesses when we started this, and it’s one thing a lot of people take for granted,” Holly Ranney says. “There are so many children out there who need help and have special needs. It’s kind of overwhelming.”

Pete Ranney, who graduated from Hilton Head Island High School in 2000, grew up around his family’s Hilton Head-based construction business, Ranney and Sons, which today is run by his father, Steve Ranney, and brother Jacob Ranney. He met Holly in 2008 in Atlanta and they married in 2010, back when he was working as an accountant and saving his construction skills for the weekend — like building their pot-bellied pig, Gracie, a custom miniature version of the couple’s home.

Starting Sunshine on a Ranney Day has had a steep learning curve, but one that’s been fulfilling on many levels, the couple says. 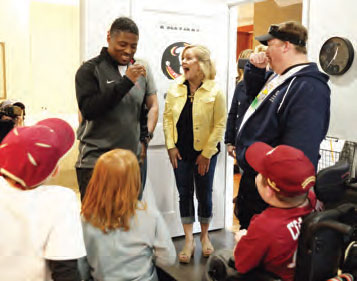 “Just doing the construction is a lot different than running a nonprofit. I think both of us are kind of surprised at what it takes to run a nonprofit,” Pete Ranney says. Both continued to hold down their full-time jobs for the first two years, but today they work full-time for the nonprofit group, along with two employees and a host of volunteers, volunteer designers and area sponsors.

Up to four projects are ongoing at a time, and the most-requested makeover involves adapting a bathroom to be wheelchair-accessible.

“It’s a life-changing thing; parents are picking up these kids and putting them in the bathtub,” Holly Ranney says of giving families a new way to care for their special-needs child — like by installing wheelchair-accessible showers. “And a lot of these families don’t feel like they deserve it, or think that there are others out there who need it more than them.”

The Ranneys also work with the nearest Make a Wish Foundation chapter as well as other nonprofit groups in the region that are geared toward helping families with these types of needs and wishes. 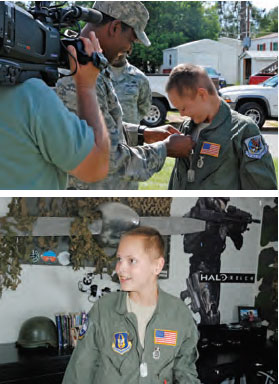 The couple’s goal for 2017 is to complete 20 makeovers. To fund them, Holly Ranney and her team of volunteers plan an annual Evening of Sunshine Gala at the College Football Hall of Fame in downtown Atlanta. Last year, the event raised $550,000.

“We’ve raised close to $3 million total since we started five years ago,” Pete Ranney says of how generous the community has been toward their mission. And his hometown has been plenty supportive, too; many from Hilton Head travel to Atlanta for the gala to donate to the cause.

The couple has talked about expanding to other areas, but the Ranneys have solid sponsor support and connections in Atlanta, not to mention a seemingly never-ending need there. Plus, families who’ve been helped by Sunshine on a Ranney Day show up to the annual gala and to other families’ makeover reveals, creating a network of support, all connected by a similar blessing.

The busy couple typically only makes it back to Hilton Head once or twice a year, but with Tucker, their first child, turning 1 this month, the pull of grandparents might be even stronger than the tug of wanting to return to the South Carolina coast — and Pete Ranney’s roots — more often.

“The best thing about it is having family on the beach,” Holly Ranney says.

For now, though, they’re happy to help families in need right where they are.