Upcoming anniversary bash and the launch of its first book, ‘Southern Coastal Living,’ starts a new chapter for the island’s famed design house.

Most companies celebrate their 30th anniversary with a party that looks back on their past success. But that’s not how J Banks Design Group plans to mark this milestone.

“If you look back, you’re wasting time. You have to look forward,” said owner Joni Vanderslice. “I look back to thank people and appreciate our blessings. Other than that, you have to always look to what’s next.”

But even while looking to the future, it’s OK to take a moment to reflect on 30 years spent growing from a locally focused residential design firm to an international powerhouse. The company’s diverse portfolio of residential work has not only landed many clients’ homes in magnificent magazine spreads, it’s also transformed how the Lowcountry looks and feels. J Banks’ hospitality division counts among its clients some of the most decorated properties in the world. And its dazzling retail store, featuring a wide selection of furniture and fabrics, export the signature J Banks look all over the globe.

In fact, as ubiquitous as J Banks is throughout the Lowcountry, most locals have no idea how very big it has become over the last 30 years.

“We have hospitality projects in 12 different states and in three different countries,” Vanderslice said. “But Hilton Head is the most important to us.”

The company’s profile began its rise thanks to Vanderslice’s dedication to creating something fresh with every project, and her steadfast belief in hiring only degreed designers. Her philosophy not only helped set the standard for casual elegance in the Lowcountry, but it began to define the Hilton Head Island aesthetic.

“At that point, there was a lot of work being done on villas and using things like wicker furniture to get villas to a certain price point. There’s nothing wrong with that, but I made a concerted decision that that was not our primary market,” Vanderslice said.

Instead, J Banks became known for the clean, modern lines and chic colors that are now seen all over modern Hilton Head. It’s hard to remember what homes looked like before Vanderslice and her team helped set the tone.

And while its impact on the home front is undeniable, it’s J Banks’ work in the hospitality sphere that has helped expand the company’s horizons from a regional powerhouse to a global influencer.

Vanderslice saw opportunity in that gap. Work on Daufuskie Island’s Melrose Club opened up new avenues for commercial design and helped her establish relationships that would take the firm around the world. Along the way, Vanderslice noted that her clients were looking to take more and more of that resort experience home with them, including the luxuries of high-end hotels like opulent white marble bathrooms and oversized duvet covers. In bridging that gap, J Bank Design Group set itself apart.

“It made me realize that we live in a resort,” Vanderslice said. “If you’re building a resort, why would you hire designers from Atlanta or New York who really don’t live this lifestyle?”

Even with these past successes, Vanderslice continues to look to the future and how J Banks Design Group is melding home and resort to create something entirely new in luxury. Keeping a toe in both worlds has allowed the firm to begin a new phase, which it describes as “home as resort and resort as home.”

“There’s so much overlap where people go on vacation and bring that home with them,” said Vanderslice.

See how these two worlds come together firsthand on Friday, Oct. 7, at J Banks’ 30th anniversary celebration. In keeping with Vanderslice’s dedication to always looking forward, the event will place a greater focus on what’s ahead than what’s behind. 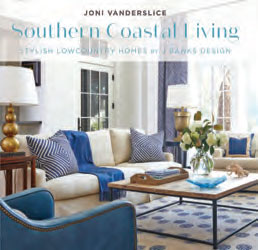 That includes Vanderslice’s new book, which will launch at the celebration and is titled “Southern Coastal Living.” Lush photos of some of the firm’s many sophisticated projects are accompanied by sidebars on what went into each project and tips on how to re-create the look, utilizing everything from texture and colors to lighting.

In addition to an all-day market, seminars on design and a silent auction, guests at the event will see firsthand the new branding that will define J Banks Design Group as it heads into the future. In keeping with the firm’s renowned dedication to philanthropy, a portion of the proceeds from silent auction and sales of “Southern Coastal Living,” will be donated to charity.

“Giving back is incredibly important,” said Vanderslice, whose philanthropic pursuits also include the Valentine Project, which provides a safe home and family environment to 19 children in Dar es Salaam, Tanzania. “We’ve given back here in the community and of course on a broader basis. It’s very much a part of our culture, our philosophy and our mission statement.”