Join us for a spin with entrepreneur Trey Snow, who’s bringing a new ride to Old Town.

The rain had just tapered off in Old Town Bluffton as Will Moody greeted me by his pedicab in the Old Town Dispensary courtyard. The brief cloudburst, a remnant of Tropical Storm Julia’s crazed path around the Lowcountry, had scared off most of Old Town’s late-night scene. And yet the electric glow emanating from under the bike still drew curious onlookers. Dodging raindrops, a middle-aged bar patron peppered Moody with questions: how far he goes, how long he spends on the bike, what he charges.

“I’m really not in it for the money,” Moody responded, a sly smile forming under the brim of his Scott’s Market trucker hat. “I’m in it for the cardio.” 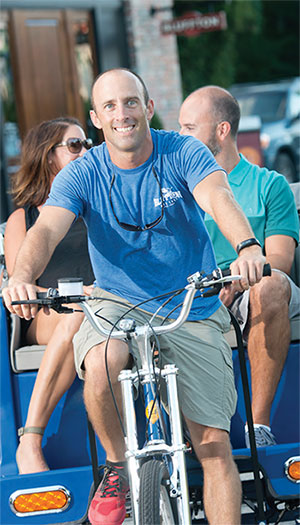 It’s the novelty of something new, the curiosity that draws onlookers out even into the rain, that Bluffton Bike Taxi owner Trey Snow is counting on to get word out about his new business. So far, judging from the chatter on Facebook, the buzz in local media and the welcoming tone Bluffton Town Council has taken, the word seems to be getting out.

“It’s really been a lot more than I was expecting,” said Snow, as he and I climbed into the pedicab for a brief jaunt around Old Town. As Moody got in his cardio workout, Snow laid out the story of Bluffton Bike Taxi so far.

A ship’s captain in Palmetto Bluff by day, Snow was inspired to start this new venture by the success and ubiquity of pedicabs and bike taxis throughout Charleston. Anyone who’s visited the Holy City can attest that bike taxis are everywhere. However, Bluffton is no Charleston.

Under the tutelage of a mentor that Snow describes coyly as “a Palmetto Bluff resident,” Snow began adapting the business model to suit Bluffton. He reached out to a company in Colorado that specializes in pedicabs, and he introduced local businesses to the concept to secure advertising on his cabs, something that will be a major revenue earner. And, oh yeah, he worked with Bluffton Town Council to help figure out how an entirely new business was going to look and feel in Old  Town.

“They’ve pretty much been behind me the whole time,” said Snow. “I feel like I’ve got their support.”

In fact, our brief bike taxi jaunt had only been legalized the night before, thanks to some fast-tracked legislation that allowed Snow’s business to operate after 10 p.m. Providing late-night transportation for just a few bucks a head after the bars close was a key piece of the puzzle for Snow, but it wasn’t the only thing.

“I’m going to offer scenic tours and history tours to build up daytime business so the weekend stuff can be kind of a given,” said Snow, adding that he eventually plans on making Bluffton Bike Taxis available for events and weddings.

Criss-crossing Old Town under Moody’s pedal power, seeing curious bystanders crane their necks, it became much easier to see Bluffton Bike Taxi take off. There may come a time when that signature blue glow under Snow’s bike taxis may become as much a part of Bluffton life as oyster roasts and golf carts. Only time will tell.

In the meantime, you can catch a Bluffton Bike Taxi throughout Bluffton’s cultural district or by calling 843-707-6807.a