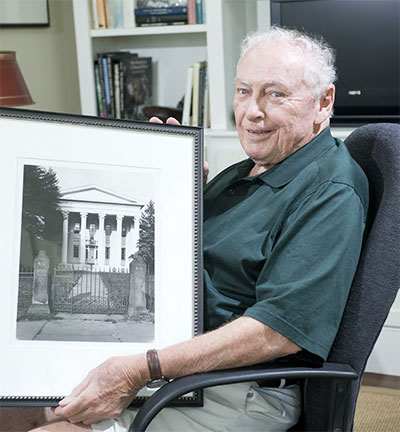 Monthly: Should a college education teach our children knowledge, skills, character or citizenry, or all of the above?

Colin Campbell: I have a very strong feeling that we are not, at any level of education, including higher education, giving enough attention to a combination of history and civics: how this country came into being, what it took to create this democracy, what democracy demands of us as citizens today … curricula ought to be paying more attention to what it is that sustains a democracy because after all, not many have been sustainable. Democracy is fragile. It’s evident in some ways in the presidential campaign right now and is quite appalling.

Monthly: Because of Donald Trump?

Campbell: (laughs) To not take into account history is shortsighted. [Here in the U.S.] we have a history that includes making mistakes. For example, President Woodrow Wilson’s 1918 Sedition Act that held anyone saying anything against the government subject to 20 years in prison. President Franklin D. Roosevelt’s executive order put 100,000 Japanese-Americans into interment camps. And now we have Trump proposing that Muslims be banned from the country … one of the critical reasons we study history is to make sure we don’t make the same mistakes again.

We’ve got to get students to understand how important it is to be engaged. Voting percentages are just awful. Paying attention to your local, your state and national government — all of it is important … but you have to have some level of knowledge and understanding to be an effective citizen. Yet [American education is] moving away from U.S. history, and civics class has virtually disappeared.

If you teach how the American government came to be — its history, and what people gave up for it and gave to it — and tie in facts on how the government works, I think it’s interesting … but it has to be taught well. Sandra Day O’Connor, whom I worked for a dozen years, started up a logical way to teach civics online called iCivics. She’s trying to bring alive to students how government works.

Look, we have all these conversations about the government, especially in the media, but do we even know what we’re talking about in terms of how the Supreme Court, the executive and legislative branches work? Those things are terribly important to know to keep democracy alive. Democracies are fragile, and if people don’t have [historical knowledge and an understanding of civics] in a time of crisis, the cost of demagogic leader could be high.

Monthly: What is the value of a liberal arts education?

Campbell: A liberal arts education is not to develop saleable skills for the immediate market. But it’s an education in critical thinking, and I think that is extraordinarily important, particularly in today’s world where there’s so much information and so much unvetted information on the internet. People have to make judgments about what they’re hearing or reading. And the way to do that is to learn critical thinking skills: to research and compare things with history, to think things through, to write carefully.

I have a very good friend, a colleague at the Williamsburg Historic Foundation who just retired as the chief executive of Lockheed Martin, probably the largest employer of engineers in the country. And he wrote a piece in The Wall Street Journal that said people who were excellent in science or engineering, but didn’t receive a broader education, did not typically rise to the top. The people that he looked to for advancement were people who had knowledge outside of their profession. That broader knowledge helped them work with diverse people.

Monthly: Do you think everyone's college tuition should be paid for (by the government)?

Campbell: No, I don’t think all college tuitions should be paid for. I think it is a rich opportunity to attend college and students are more likely to succeed if they have invested in it. Now, if it’s too expensive for them, for their family, then they should get help.

But I see community colleges quite differently from Wesleyan or Wellesley or Georgetown, for example … community colleges are vocational centers, they’re really important contributors to our society. And my sense is that the lowest price down to zero ought to be offered. The country needs people to advance beyond a high school education today. Jobs are more complex than they used to be. Technology requires more than a high school education to deal with it effectively. [But] without the kind of breadth of education that you get from a liberal arts college, vocational students will need to enrich their minds elsewhere.

Monthly: Building resiliencein students is a hot topic. But in today's world, where millennials have grown up in a mass-consumerism culture with an unparalleled standard of living, can resilience be conditioned?

Campbell: What do you mean by resilience?

Monthly: To toughen up.

Campbell: Yeah, (laughs). That is a big issue and it really has a lot to do with parenting. I was president at Wesleyan for 18 years and during the later portion of my tenure, parents were becoming activists in every aspect of their child’s college life: their living arrangements, their courses, their extracurricular activities, their class ranking … What that says to your child is that he or she still needs a lot of nurturing and guidance, even when they’re grown up. College students ought to be treated as grown-ups and left alone. Our dean used to say frequently to parents, “Your sons and daughters are in the best hands possible, don’t be concerned. And what do I mean by the best hands possible? Their own. And they’ve got to grow up. There may be some rough moments, but give them a chance.”

Monthly: What is one of the biggest obstacles facing first- and second-year college students today?

Campbell: I’m very concerned about the perception that getting “the job” is the end all, be all. Your education doesn’t have to be tailored to what you want to do … I worry that younger students feel that pressure, and it’s quite acute at times. A college education is such an advantage, you can worry about “the job” further down the road. Besides, you just never know. I started out as a lawyer on Wall Street and that’s not exactly where I ended up.