“We were shopping at Christmastime for our dogs’ Christmas stockings, and every package we looked at had more chemical-sounding ingredients than actual food ingredients,” she says. “We were pretty shocked. I kept saying, ‘This is gourmet?’” 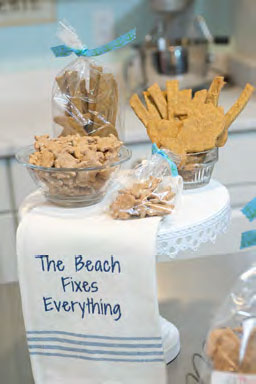 Christian thought she could come up with something better, so instead of buying pre-packaged treats, she bought a cookie cutter in the shape of a dog bone and then headed home to get baking.

“I wanted to keep it simple and easy to digest,” she says. Her first concoction, which remains the business’s mainstay cookie, has just four ingredients:  whole wheat, oats, bare peanut butter, and local honey. The result was an instant favorite among her dogs, 9-year-old Australian shepherd mix siblings Bella and Brewster. (She has since added 7-month-old rescue pup Birdie to the family.)

“The first batch I baked, our dogs responded very differently than we had ever seen,” Christian says. “They were savoring it instead of just swallowing it.” She gave some of the treats to friends and neighbors, and their dogs responded similarly.

After witnessing such a strong reaction, Christian’s entrepreneurial spirit came to life. She traded in the bone-shaped cookie cutter for beach-themed shapes she found online — shells, seahorses and fish — and came up with a business plan. Though she lived in Atlanta at the time, Christian decided to combine her love of dogs and her love for the beach to form Beach Beggin’. 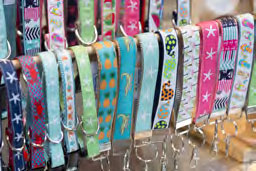 At first, she continued with her full-time management job in the telecommunications field, baking and selling beach-themed dog biscuits on the side. “After one season, I knew I wanted to do this full time, and I wanted it to be here,” she says of Hilton Head Island. She and her husband already owned property in Bluffton, so in the spring of 2015 they broke ground on what was supposed to be their retirement house, tailoring the kitchen design to Christian’s burgeoning business.

“We built the house specific to the business,” she says. “I have nine racks of convection baking. And we didn’t do a typical island like most people would do. Instead I have a professional prep table where we do all the rolling and stuff like that.” 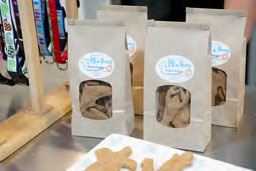 This wasn’t Christian’s first foray into entrepreneurship. In 2006, she left her office job to start her own interior design business, a passion she’d had that might have taken off had the country not been sliding into a recession and housing market decline at the time.

“I was very passionate about it and I enjoyed doing it, I loved being a business owner, but my timing could not have been worse,” she says.

Though she ended up returning to her office job, Christian tucked away the design skills she’d learned and used them when designing their Bluffton house. She also has called upon other insights she gained as a business owner.

“I’m really glad I stopped saying things like ‘I can’t. I don’t know how,’” she says. “It’s easy to take a failure and let it define you. But if you step back and look at the roadmap that is your life, you can start to see where those bumps in the road take you off course and put you where you needed to be.”

What started with selling dog treats at farmers markets has grown to include beach-themed dog collars, key chains and cuff bracelets, sold both at farmers markets, local retailers and on her website, www.beachbiscuitlove.com.

“The collars really just started because I couldn’t find cute collars for my dogs. I wanted them to have coastal collars and I couldn’t find them. So a crafty friend made me some, and as people started to see them, there was a demand for it,” she says. “Now it’s one of the largest segments of our business. People love the collars.”

When local retailers asked her to add beach-themed dog collar key chains, the savvy businesswoman knew there was only one answer. “I thought ‘Sure, I can learn how to do that,’ so I did.”

She now has three part-time employees helping her bake, package and sew her wholesale and retail orders. She says vacationers who return to the island each year have made her part of their vacation tradition, and local residents have become her loyal consumer base, which is her favorite part of being a business owner.

“You hear it’s all about location, but I think business is all about people,” she says. “A lot of my customers have become my friends. I know their dogs’ names. I love that personal connection I make with people.”

On other Beach Biscuit flavors: Instead of honey, we sometimes use in-season fruit like blueberry or peach.

On having dogs: I’ve always been a dog person, but as a child we never had a dog. So when I went out on my own and had the space for one, that’s the first thing I did. I can’t imagine my life without them.

Favorite vacation spot: Europe. We do independent travel; I plan everything. We don’t do group tours.

On living in Bluffton: We love it. It is everything we wanted and expected and more. We still have friends and family back in Atlanta, but I have not hit Interstate 16 since the day I moved here.

On the secret to business success: Don’t worry about failure. Failing is easy; anyone can do that. So if you’re going to fear anything, fear success and how you’ll handle it.