FOR BEVERLY O’CONNOR-MARTIN, BUSINESS HAS NEVER BEEN BUSINESS AS USUAL

When she was just a young woman attending boarding school outside of Paris, Beverly O’Connor’s headmaster imparted to her father what turned out to be a pretty on-the-nose prediction.

Celebrating entrepreneurs:
If you would like to nominate an entrepreneur from Hilton Head Island or Bluffton, please email editor@hiltonheadmonthly.com

Your daughter, the headmaster prophesized, is going to make her living with her hands.

As it happens, she did. 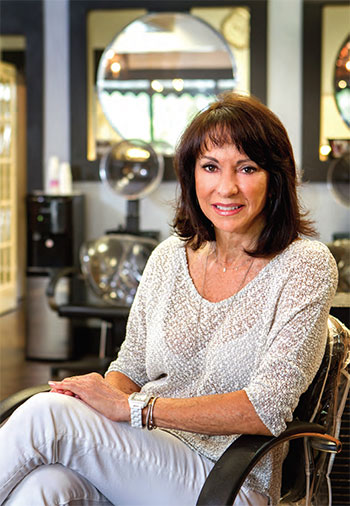 “I used to model with clay, and I think that’s where the interest came for designing hair. It’s architectural. You’re working with elevations, angles and textures,” she said.  “That’s the bigger part of the business for me, making somebody look better and feel better.”

If the simple act of transforming hair into something amazing is the bigger part of the business for O’Connor, it must be fairly big. Because the “business” part of the business has, over the years, encompassed a string of seven salons, beauty shops and spas around the island and in Bluffton, plus another five in her native Chicago. (Also a nightclub, but we’ll get to that).

“I’ve always been a doer,” said the entrepreneurial O’Connor. “If I started talking about something and not just thinking about it, I just did it.”

And even though O’Connor has carefully graduated her empire down to where it all started around here — the iconic New Orleans Road institution Tara’s of Hilton Head — her bright eyes and boundless energy make it easy to see how she could have created so much in the course of her career.

Recruited straight into an apprenticeship from cosmetology school, O’Connor was a natural as a stylist. But after two years in her apprenticeship, where she worked while still attending school, the entrepreneurial bug bit and she was soon looking into putting out her own shingle.

With a business partner ready to go and a bank loan co-signed by her dad, O’Connor soon opened her first beauty salon. She was 22 years old and living her dream. None other than Frankie Avalon became a valued client, appearing in print ads for the shop. And while the business was good, her relationship with her friend and business partner was becoming strained. And that’s when O’Connor learned her first lesson about business.

“Partnerships are hard,” she said. “I decided I still wanted to remain friends, so I said to her, ‘How about if you buy me out?’”

The amicable separation left O’Connor without a salon, but that wouldn’t last long. She started opening beauty shops all over the greater Chicagoland area. She continued for years, her infinite energy letting her open, build and sell seven different salons in the area. At one point, with building still progressing on one of her latest shops, O’Connor was even cutting hair in her home, shaking the sheet out the window between customers.

But as so many do, O’Connor found herself drawn to sunnier climes in the Southeast, which is how she found herself on Hilton Head Island in the late 1970s, just as the sleepy island was finding itself as a hometown.

“There were two shops on the island, and I worked for both of them” she said with a laugh. “After a couple of years, I opened my own. I said, ‘I’m not going to retire at 36.’”

That first shop was named for her daughter, Tara. And it still occupies the same spot on New Orleans Road. More would follow until O’Connor claimed seven different salons around the island.

“As stylists moved to the island, they would discover the place and ask for work. When I couldn’t hire them, they would ask ‘Well, why don’t you build another place so I can work for you?’ and I would say, ‘OK.’”

In addition to salons, O’Connor found herself part owner of a nightclub opened by her then-husband, which brought acts like Bob Hope and her old pal Frankie Avalon to the island.  “It was fun for the first year,” O’Connor said. “After that, you had to be there 24/7.”

And along with the nightclub (which is now a church), O’Connor eventually started narrowing her focus. She sold off her various salons, all of which are still in business, and now she maintains her chair at Tara’s along with her partnership in a salon in The Cypress with business partner Janet Beaman.

“I’ve always surrounded myself with good people,” O’Connor says of Beaman. “When I first got here, I hired (Beaman) to be a part-time receptionist and do the books. From then on, she did the business end of things.”

The part-time receptionist would ultimately both work her way to equal partner and prove the exception to that first lesson. “We’ve never had an argument,” said O’Connor with a smile.

“Have a passion for what you do,” she said. “The rest will come.”

2. Get along with people. “I’ve always slipped a couple dollars to employees when it would slow down … that’s why most people stay with me.”

3. Make sure you get good people to work for you. “Keep the negative people out of your business and life, and find positive people.”

4. Be prepared to go the extra mile. “You are always putting out fires.”