CELEBRITY HAIRSTYLIST RELOCATES TO THE LOWCOUNTRY, LAUNCHES HIS OWN LINE OF SHEARS

After jet-setting around the world, celebrity hairstylist Dennis Stokely has returned to his Southern roots. Best known as Paula Abdul’’s hairstylist during seasons seven and eight of “American Idol,” Stokely has settled in the Lowcountry and has launched a brand of hair shears for the beauty industry.

Now living on Hilton Head Island, Stokely moved to the area to take care of his mother, who lives in Savannah.

“I’m a Southern kid, raised by a single mother, who went to public school in Georgia,” Stokely said. “While working on ‘American Idol’ was the gig of a lifetime, I believe my Southern sensibilities set me apart from others in L.A. It seems only natural for me to return to a place that feels like home.”

Mesmerized by gorgeous hairstyles as a kid, Stokely constantly begged his sisters to let him style their hair. He dropped out of the University of Georgia his sophomore year and moved to New York City to work as a model before turning his attention to his first passion, hair styling. His big break was being hired to answer the phones at the famed Kenneth salon at the Waldorf Astoria Hotel; later, he trained at the Frédéric Fekkai salon. 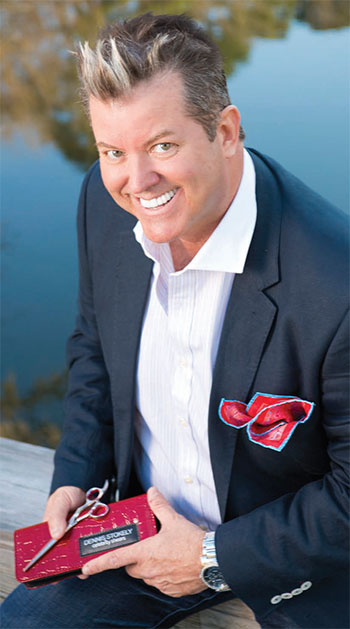 Determined to work with Hollywood stars, Stokely landed a job at Privé Salon in Beverly Hills. Alexis Vogel, a celebrity makeup artist with clients such as Cher, noticed Stokely’s talents — and manners — when the two worked together at a high-profi le wedding. Stokely said that when he thanked her at the end of the day, Vogel surprisingly replied, “Wow, who are you? Nobody ever thanks me.” The next week, Vogel booked Stokely for an OK! Magazine shoot with Paula Abdul. After the shoot, Abdul’s team booked Stokely for the season six finale of “American Idol.” That assignment led Stokely to London to style Abdul’s hair for a week of media appearances. Returning to Los Angeles, Stokely left his salon job and was by Abdul’s side until she left the show after season eight.

"There are thousands of great hairstylists out there. My Southern kindness and whatever talent I may have has helped me succeed,” Stokely said. “My motto: Be good at what you do and be nice."

When Abdul left the show in 2009, Stokely left Los Angeles. Seven years later, Stokely is back in the South, close to his mother, Jeanette Woods, and styling hair at Bluffton’s Blow the Hair Bar. Stokely still frequently travels for assignments, judging hair shows, teaching master classes at salons and college campuses, and writing for the beauty blog LA-Story.com.

“The popularity of ‘American Idol,’ seen in more than 100 countries, gave me a unique platform to showcase my work,” Stokely said. “Branding myself in the beauty industry after leaving ‘American Idol’ has been my main focus

As part of that effort, he partnered with Washi, a leading manufacturer in the hair industry, to launch his line of shears at America’s Beauty Show in Chicago last month.

“”These are the scissors I use to create a flawless haircut, which is the foundation of all my redcarpet hairstyles,” Stokely said. “My name is engraved on each pair, and for a kid from South Georgia, that’s very validating.”

Made from Cobalt steel, the lightweight, luxury shears cost $399.

Marc Milman, president of Jupiter, Floridabased Washi, said he was impressed with Stokely and his client list.

“He does a lot of great work, and we are on the same page in terms of looking to expand our horizons to bring quality tools to salon professionals,” Milman said.

Stokely, 52, said that as he enters a new phase of his career, he has designed a more balanced lifestyle.

“The ‘American Idol’ schedule was relentless,” he said. “While it was a highlight in my career, returning home represents the natural ebbs and flows of life and symbolically, I have returned to live on the coast. And with my relationship with Washi, it seemed effortless to partner with them and launch a new product. And when new opportunities seem effortless, you know you are in the right place.”

Stokely will continue his product launch at the Premiere Orlando beauty trade show in June, and said he’s excited about new opportunities.

“I’m stoked for the future and I am happy to call Hilton Head my home,” he said.