Cheryl Klippel is not afraid to fail, a fact the local entrepreneur says is the reason she has such a solid record of success.

“So many famous people make reference to jumping off a cliff. In life you can jump off and take that leap of faith that your parachute will eventually open, or you can back off and never take that risk. I’m not afraid to take that risk; I’m not afraid to fail,” says Klippel, who owns three island retail stores and one bustling café. “You’ll scrape across the rocks, but if you don’t take that jump, you’ll never soar.”

Klippel has done nothing but soar since opening Pelican’s Pouch at South Beach Marina in 2001, when the owner of the marina, a family friend, encouraged her to open a souvenir shop there. She had been working as the executive director of The Children’s Center and didn’t have any retail experience. 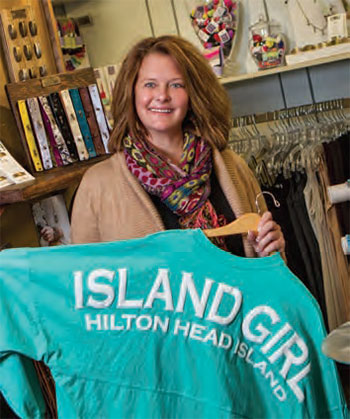 “I just learned by trial and error,” she says. “The money we made the first year I invested in more product, and it just kept building from there.”

In 2003, Klippel opened a second venture, Island Girl, inspired by her young daughter, Emily. Unlike the souvenirs and home décor found at Pelican’s Pouch, Island Girl started out as a children’s boutique before expanding to include women’s clothing and accessories. Eight years ago, the success of that store brought her to open a second location in Coligny Plaza. With about 3,000 square feet of retail space, that location has become the flagship store, with much more inventory than the one in Sea Pines.

With excellent staff at all three stores, the single mother says she has been able to keep her children, ages 15, 14 and 12, her top priority.

“I have managers in every store that I trust, and they know that my children come first,” says Klippel, who juggles daily drop-offs, pickups and extracurricular activities for her kids. “It’s all about a team, working together. I’m very much a mom first, followed by being a businesswoman.”

But the businesswoman in her never rests. In tune to the island’s needs and offerings, Klippel noticed a few years ago that the island’s dining scene was lacking in the frozen yogurt and pick-your-toppings arena. So in March 2012 she opened Watusi, a frozen yogurt and coffee café off Pope Avenue. The name, which translates to “What you see,” was created with Klippel’s keen business sense.

“I thought, ‘What can we have that people will buy on a T-shirt or mug or coozie?’ I felt people weren’t going to buy a T-shirt that said ‘Island Yogurt’ or something. But people use sayings like ‘It is what it is’ all the time, so that was such a good catch phrase — ‘Watusi — what you see,’” she says. “It’s unique, and when you’re unique you stand out.”

Klippel’s instincts were right: The restaurant sells a ton of T-shirts, coffee mugs, sippy cups and stickers with the “Watusi” logo. Still, the café itself was slow to catch on, which lit a fire in the entrepreneur’s heart.

“I wasn’t going to allow it to fail. I was always thinking, ‘OK, what are we gonna do?’” she says. “All the retail stores had been very successful from the beginning, I’d been very fortunate. But when I started Watusi, I was out of my element. They say it takes three years to make a restaurant successful. If I hadn’t had the retail stores to support Watusi, it would have been very difficult.”

Eventually Klipple found the right combination, taking the yogurt off the menu and adding more breakfast and lunch options.

“Now it’s this cute, cozy café with leather chairs and outdoor seating,” she says. Her sister is a managing partner at the restaurant, which has allowed Klippel to return more of her focus to the retail stores and keep up with her kids’ busy schedules. And they are busy: Her youngest, Emily, attends Hilton Head Preparatory School, her oldest, Jack, is at Heritage Academy, and Collin is at Hilton Head Island High School. “Because all kids are different and need different things,” Klippel says.

Her entrepreneurial ventures haven’t always come easy, but they’ve always been worth it, she says.

“Out of everything I’ve done, Watusi was the biggest struggle,” she says. “But I’m glad I stuck with it, because it is now successful.”

That stick-with-it attitude is something she learned as a child.

“You can blame everything on my parents,” Klippel says, “because they brought me up to believe I could do anything I want.”