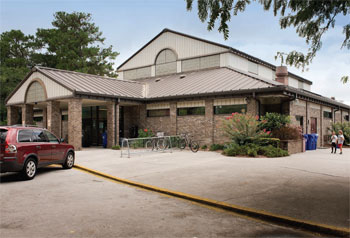 After all, the 14,000-squarefoot rec center, as it’s known on the island, was built 25 years ago. It’s now looking run down and it’s extremely crowded. That’s not surprising considering that the town’s population was 17,000 permanent residents when it was built. At the time of the 2010 U.S. Census, there were 37,099 permanent island residents.

The rec center has certainly tried to stay up-to-date in its many offerings. Its amenities include a gymnasium, playground, and eight-lane pool, outdoor tennis and basketball courts, multi-purpose field and a couple of meeting rooms.

However, the physical facility has not grown along with the population, programs and number of visitors. It’s crowded and just plain worn out.

Additionally, the S.H.A.R.E. senior center, which is operated by the rec center, had outgrown its 2,100-square-foot space on Office Way .

He said the center currently has about 170 children enrolled in a boot camp summer fitness program, “but we have to find somewhere for them to go.”

He also laments the center’s inability to offer the community even more programs.

“If we had the space, we could expand programs,” he said. “We have a lot going on and we’re working on growing our opportunities.”

In early 2008, the rec center took action and conducted a community survey, asking residents what they wanted in their local recreational facility. The wish list included indoor tennis and basketball courts, a gym with a track, pools for children and more.

In 2009, the Town Council OK’d a feasibility study on building a new rec center or expanding the existing facility. The study, which cost about $50,000, was conducted by Lee & Parker Architects, FWA Group and Mission Resources Group. The town also completed a supplemental study to decide whether a separate facility for an aquatics center was viable, according to town Manager Steve Riley.

Two of the most pressing needs are being addressed: the senior center and parking at the rec center. As anyone who has visited the center, the traffic can sometimes be worse than the Sea Pines circle on a hot weekend day. Parking has been at a premium, with only 57 spaces available.

So, construction is underway to add 60 parking spaces across from the center on Wilborn Road, said Soule.

Additionally, the S.H.A.R.E. center moved in July to a 3,000-square-foot space at Shelter Cove across from the old Cracker Barrel restaurant.

The next step is to attack the center itself, which is currently in the hands of Town Council.

Originally, the town was looking at building a new facility. Those plans, however, have been scaled back to look at renovating and possibly expanding the current facility and building a separate aquatics center, likely at Chaplin Park

When and if those $12 to $14 million improvements take place and a timeline will be decided in the coming months by council, said Riley, although he is optimistic.

Where the money would come from is also up in the air. It could consist of a tax increase, user fee increases, fundraisers, corporate sponsors, grants, and reaching out to local civic organizations for financial help.

“The rec center was built with ATAX (bed tax dollars targeted for tourism) money,” said Riley. “But there are so many demands on that money that I’m not sure how we could justify that today as a tourism component.”

Riley added that the town feels very strongly that the rec center offers a great deal to the community. “The town sees this as necessary,” he said. “Recreation is something that city government is involved in. It provides things for young people. It’s part of healthy living and a healthy community.”

In the meantime, council will be discussing what the next steps are. But the rec center folks are hopeful their dreams for the community will finally come true.

“This is very exciting,” said Soule. “We’re very hopeful that we can finally grow with the community.”