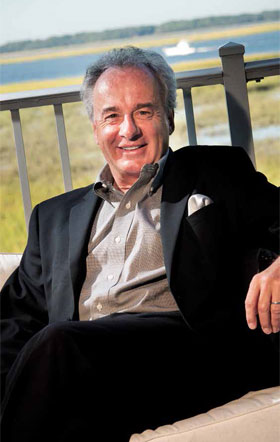 Bruderer learned about the organization through the Society of International Business Fellows, and he decided to start a chapter in the area. Since November 2012, 10 members have joined.

The monthly group meetings include a guest speaker who talks about some aspect of business. For example, September’s presentation was about different ways to look at financials in a business.

“We had an incredible person come in and talk to us about all the social media and other apps that can help you as a CEO,” Bruderer said. The speaker showed the members how to use social media as an executive and how to use it as part of a business tool. “So now I have a Twitter account, and I have a Vine account.”

Wes Stone, CEO of food broker Ultimate Sales, also learned about the group online. Originally, he was going to join a chapter in Atlanta, but then the Savannah/Hilton Head chapter started.

As part of his chairman role, Bruderer has one-on-one meetings with each member as a mentor. According to the Vistage website, chairs lead these sessions to provide expert advice, to encourage personal growth and to hold CEOs accountable for the things they say they will do.

Stone said the group has helped him continue to learn about aspects of managing a business.

“It helps me make decisions quicker,” he said. “We task each other to get things done before the next meeting.”

Each chapter also acts as an “advisory board” for members. “As a CEO, you’re always the lonely person on the top of the organization,” he said. “In a great group, the members are challenged and kept accountable by people on the same level, who have no personal agenda, no interest in your company. They have an interest in you.”

According to literature from Vistage International, “Vistagemember companies are better run and grow their revenues, on average, at more than twice the percentage growth rate after joining Vistage.”

Bruderer has decades of experience being in executive roles at several companies and non-profit organizations. He served as CEO and director of a couple of real estate corporations. After moving to the Lowcountry, Bruderer served as chairman of the board at Lowcountry Motors and director and chairman of the executive committee at Coastal States Bank. He has also served on several boards, including for the Sea Pines Montessori School, Hilton Head Preparatory School and the Arts Center of Coastal Carolina.

Out of the 10 members, eight are from Savannah and two are from Hilton Head. Bruderer says he sees this area as growing and there is potential for more chapters.

“Vistage hasn’t been around here so it’s kind of a new market,” he said. “So one of the challenges is to go out and tell people what Vistage is and get more brand recognition.”