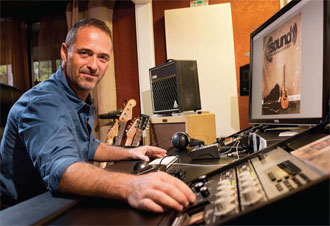 With a local music scene that is growing ever more professional, it’s no surprise a producer with a national presence would consider setting up shop on Hilton Head. As local acts step up their game by working hand-in-hand with bar owners, enhancing their live shows with better sound and lighting, and promoting themselves more than ever, they are finding a lucrative career right here. In the past, hungry to make it big or to get their music heard, they often found it necessary to travel to places such as New York City, Nashville or Los Angeles.

Meanwhile, Greg Critchley, a producer, songwriter and musician working in New York and Los Angeles, noted the evolution during his frequent visits to Hilton Head over the past 15 years. With the music business changing and becoming increasingly Internet based, Critchley found himself in a career that no longer required him to be in L.A. or New York. He decided two years ago to move here for a three-month trial period to see what the island and its music had to offer.

He liked what he heard and decided to set up shop here permanently, opening The Sound Recording Studio and Music Production at 119 Arrow Road.

But it is not just a studio he has built where you book a session, pay X amount of dollars and have your songs recorded.

It is far more than that. It is more of a hub or a portal that offers a chance for local musicians to be heard in L.A., New York, Nashville and beyond.

Aside from already producing albums for local favorites such as Cranford Hollow and Joseph Vicars, he has also employed a number of local musicians such as Brian Simpson, Reid Richmond, Will Snyder, Jevon Daly, John Ruxton and John Wilkins to play on tracks for Nickelodeon, Disney and other local records.

In addition, singers Angie Aparo, Sterlin and Shuvette Colvin, Savannah Edwards, McKenzie Eddy, Taylor Kent and Stee Colvin have sang on records, demos and TV spots at The Sound and Critchley is always on the lookout for new local talent to hire and work with on future projects.

The diversity of these projects does not end there. He has recorded a meditation album, interviewed the former deputy director of the CIA, recorded a compilation of jazz standards with legendary duo Lynn Roberts and Bob Alberti and just recently wrote the theme song for a new show called “Movie Night” that will air on E!. He also is working on music for TV shows for TMZ, Extra!, Anderson Cooper and Dr. Drew.

Critchley has bigger plans for the future as his studio grows.

He would like to start bringing in bigger acts from out of town and is looking to recruit a core group of players who can read music to be his “house band,” as he puts it, as well as setting up songwriters’ workshops and collectives for local artists/writers to collaborate with West Coast writers to bring as much growth to the island as possible. He is also actively soliciting TV and film licensing for local songwriters as part of The Sound’s new record label activities.

Critchley envisions his studio becoming a community resource, a boon to the island economy and a site of artistic collaborations for local musicians. He also suspects its location will appeal to musicians from around the country. His website points out it’s only a mile from the beach, a tropical attribute not lost on the Canadian native.