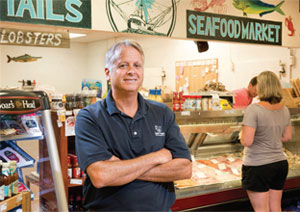 His hair is grayer than it used to be. He’s raised a family despite being married to a building and a profession. The megastores are spawning all around him.

Yet, as Dave Martin begins his 33rd year as the outfront man for a five-decade Hilton Head Island institution, he has never been more excited to come to work in the morning.

“You can only stack soup cans for so long without it getting monotonous,” Martin said while sitting atop a stack of boxes in the stock room of the Coligny Plaza Piggly Wiggly. “At the end of the day, the thing that still gets me charged up each day is the people and the idea that after all these years, we’re still giving the islanders something different each day.”

Martin, 55, is the son of Gene Martin, who opened the store May 28, 1969. The former Red & White franchise made the change to the Piggly Wiggly brand in 1992, a move at the time that Martin said saved the business.

“They provided us much more options and support while letting us be as independent as we wanted to be,” he said. “It’s a business model that saved our business.”

Beaufort County has now watched a trio of Piggly Wiggly stores close within the last year, as the parent company Piggly Wiggly of the Carolinas continues to sell off many of its company-owned stores in a grocery sector that is becoming all about big conglomerates eating up the little guys.

Martin’s store is different. He is a franchisee, so those worrying that he’s next need not worry.

“In fact, we’ve never been in a better position, honestly, in terms of the company,” Martin said. In November, $30 billion food supplier C & S, the owner of the Piggly Wiggly trademark, took over as Martin’s direct food supply contact. 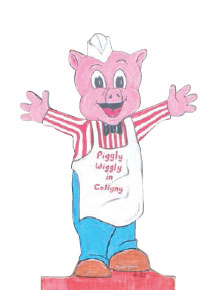 “We’ve actually seen the price go down on about 90 percent of the items we buy,” he said. “It may be pennies, but it truly starts to add up. And the quality is still as strong as ever.”

Martin shrugs his head at the thought of the shiny new stores tearing down his business. Survival is in the Martin blood, and they’ve had plenty of practice at it.

“We’ve actually seen very little hit since this humongous behemoth opened,” he said. “People constantly tell us they want the smaller, unique experience. This just makes us focus on what we do best even more.”

As the other two Piggly Wiggly stores on the U.S. 278 corridor closed, Martin has capitalized on the thirst for authentic Pigwear.

“Any hit we took from Kroger, we’ve made up in just the merchandise sales and we’ve beefed up our Pig Corner,” he said.

After graduating from Stetson University, Martin started working with his dad at the store in 1982. He said that the opening of the Bi-Lo across the street in 1987 was by far the lowest he’s ever seen the business.

“We were trying to fight with prices and we weren’t winning. It was the closest we’ve ever come to selling, but faced with that, it made me realize how much this business meant to me,” Martin said. “I was fighting up a storm, saying, ‘Why would they build that there?’ But it grew me up a lot. It’s their land to do with whatever they want. We just have to focus on us.”

Martin was the only one of five siblings that showed that passion about the business. He started buying the store from his dad in 1999 and became the outright owner in 2010. All the while, he worked with his father to truly make The Pig’s offerings unique.

“It’s all about service and quality. That’s where we could win the fight,” he said. “I’ll hire just about anyone, but if you can’t smile and you’re not all about helping people, you can’t work for me.”

The personal connection is what made the Martin family so beloved. During the many real estate downturns and financial crashes, most notably in 1974, the Martins let customers run tabs and constantly told folks “you’re good for it.”

“I still have folks come up to me and tell me, ‘If your father hadn’t allowed me to run a tab back then, we would have starved to death,’ " he said. “It’s those realities that hit home with me in the service we provide.”

Beyond the customer service, Martin emphasized the local products available at the store. From Vegetable Kingdom in Beaufort to Maurice’s BBQ out of Columbia to Your Mom’s Bloody Mary Mix out of Hilton Head, he’s always looking for local winners. The latest: a kettle corn popcorn made my a local firefighter that Martin can’t keep on the shelves.

Martin also worked to develop a couple of condiment private-label brands, Taste of the Carolinas and Hilton Head Kitchens – made by a Georgia supplier specifically for the Coligny Plaza store.

And he got involved in the community – hiring as many kids as he could, many who have made the 30-year ride with him. While the family does little advertising, they sponsor local events as much as possible. He worked with the Shelter Cove Pig to start a “bagging for tips” program to support Hilton Head Island High School athletics, and it has pumped more than $80,000 into the program over the last five years. (It will continue even as the other Pig closed its doors)

Then there’s the seafood. Martin quickly realized this could become the store’s calling card.

He and his father developed two key relationships with century-old Matthews Seafood out of Savannah and with Sea Eagle Market in Beaufort. Whereas the “big boys” are offering frozen and farm-raised products like shrimp, Martin’s product is coming right out of local waters.

“I have vacationers who come in every year telling me it’s the best black grouper they’ve ever had,” he said. “Folks come into town and salivate every day, coming in to get some local shrimp steamed and seasoned with Old Bay. You can’t beat that. They know this stuff hasn’t been sitting in a freezer for months. We just wouldn’t do it.

“We were one of the first to sell it in a store in the mid-‘70s, before then it was just being peddled on the streets. Come 1987, it really became clear that seafood was the difference maker for us.”

Now, Martin is taking that commitment a step beyond. He is working with Sea Eagle’s Craig Reeves and a group of local investors to buy a co-op shrimp boat, which should be operational by next spring. 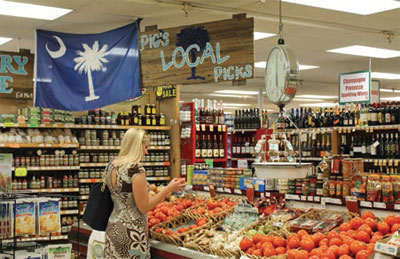 “It will give us even more control over the product,” he said. “You won’t see me driving the boat, but it’s a cool thing. To be able to vouch personally for it coming out of the water … I can’t wait.”

It’s that kind of passion that makes folks wonder if Martin is even human. He’s at the store every day, save for the food show trips to find new products and new business practices to bring back to the island.

His wife, Chris, and his kids – daughter Kayla, a grad student at Penn and 22-year-old son, Austin – have rode the waves of the business. Just as his father made sacrifices and lived and breathed the store, Martin is doing the same.

“My family kids that it’s the third child, the fifth seat at the dinner table,” he said. “We’re always talking about it. It consumes us this time of year, we get a breather in the winter downtime, but it’s always the focus.”

Over the years, Martin has also become the unofficial mayor of Coligny Plaza.

“Listen, I’m plugged in, it’s hard not to hear folks and want to represent them. I wear that hat proudly,” he said. “The town and the chamber may get tired of hearing from me at times, but sorry, it’s who I am.”

His latest fight: parking at Coligny being overridden by beachgoers.

“Folks think I might hate Kroger, but that’s not it at all,” he said. “I just want to see the park and the parking down here addressed. Shelter Cove got all that attention, we need the same attention down here.”

Gene, now 82, still works at the store, focusing on ordering supplies and stocking the beach supplies section. Austin has become a fixture in the store, working his way up and learning every facet of the business just as his dad did.

“I want him to finish college, see the world a bit, and five or six years down the line, if he comes back and says, ‘This is what I want,’ then we’ll talk,” Martin said. “Because you really have to love this. The customers can see if you don’t.”

Until then, Dave said he’s still as excited as ever. Yes, the rented building is showing its age – there’s been little room to grow since the seven expansions of the space in the first seven years from ’69 to ’76. But he’s still raring to get to his 22,000-square-foot slice of nirvana as when he first started with his dad in 1982.

“Hey, we have no insulation in the walls, but we work around it. I focus on the positives,” he said. “And man, I’m still bouncing off the walls ready to get in here every morning. I’m still in love with my job and with the people.”