Mothers may fight with daughters. Daughters may spend their formative years embarrassed by their moms. But the bond they share through it all, from the playroom to the boardroom, is a unique kind of love. It’s the mentoring guidance of a trusted advisor. It’s the support structure of a close sisterhood. It’s the invaluable bond of a best friend.

And if you take that sort of relationship into a business, as you’re about to see, it makes for one happy family. 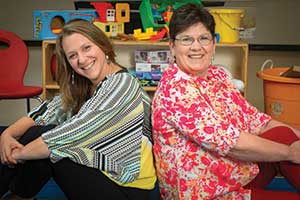 It’s barely daybreak when the first parents start filing into Amazing Creations Early Childhood Education Center. Eyes bleary and breath thick with coffee, they wrangle children who have been going strong since 6 a.m. and negotiate car seats, boosters and baby carriers as they deliver their charges to another day of learning.

And while the parents are barely awake, the kids are wide eyed with excitement. It’s hard not to be excited, when the day ahead could include anything from crafts and puzzles to visits from firefighters and police officers. This atmosphere of fun exploration and learning was created by two women, Marsha Davis and Cathy Ferguson. They’ve been business partners since 1998, but their relationship began much earlier, before Cathy was born. Because these two, like a surprising number of area entrepreneurs, are mother and daughter.

“I’m her right-hand person and she’s mine,” Davis said. “We just make a total package.”

“She’s so supportive,” Ferguson added. “I can count on her always.”

The pair’s lifelong bond works for them as the emotional core of Amazing Creations, an adventure they’ve shared through new locations, extended growth and a slew of accolades along the way including several Hilton Head Monthly Readers’ Choice Awards. Even before that, they worked together at the family air conditioning business. There is such a comfort and familiarity between the two that if you ask about any hesitations they might have had about mingling family and business you’ll get an answer of “none” in stereo.

In fact, the only time their relationship as mother and daughter works against them is when they try to vacation together.

“We went on vacation last month, and that was the first time in 15 years we’d ever taken a vacation together,” Ferguson said.

And while family dynamics are like snowflakes, no two being alike, there seems to be a common thread that binds mother and daughter that just seems to work in a business relationship.

“Psychologically, remember that women seek fairness while men seek the win,” said Debi Lynes, a licensed therapist with a PhD in psychology. “So in many ways it makes sense that the girls pull it together so that everyone feels treated with fairness. Thus, happy business partners.”

It makes sense, especially when you sit down with some of the amazing mother/daughter teams that populate the Lowcountry. 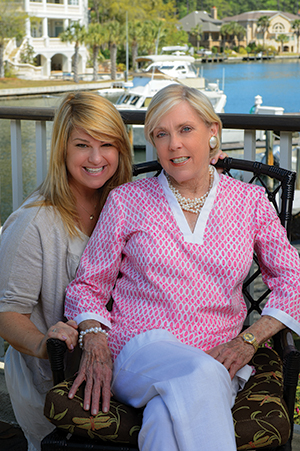 Cut to later in the day, a table right up front at Red Fish as the lunch rush begins. Lottie Woodward and her daughter, Courtney Woodward May, are attempting to illustrate how their connection as mother and daughter fuels their partnership at the Woodward Davis Team.

We say attempting, because every few minutes another old friend walks by, another trusted client, another neighbor for whom everything must stop while warm greetings and hugs are exchanged. This rich social network is a side effect of the job, the lunchtime routine of more than 30 years in local real estate.

“I promise not to talk to anyone else,” said Woodward after one meet-and-greet, before returning to her point, which was, ironically, her love of people. “That’s the thing about Hilton Head. It’s a relationship business.”

Woodward should know, having sold real estate on the island since the late ‘70s while meeting pretty much everyone who calls Hilton Head home.

“It helps when you’re selling a house if you’ve already sold that same house four or five times,” she said, her deadpan sense of humor sparkling.

“Those houses she sold four times? I was the kid sitting out in the car waiting for her to get those contracts,” May said with a grin and her own deadpan style.

May grew up in the world of real estate, helping her mom stage houses, learning what flowers work best by the front door, and seeing first-hand what it takes to make that sale. It’s a lifetime of experience at the apron strings of a real estate juggernaut that she’s bringing to bear as her mother introduces her to the family business.

But there’s one thing that can’t be taught, and that’s personality. And if you’ve met Woodward, you know she has personality to spare. Her daughter is no different.

“She’s been saying for years she either needed a wife or she needed to clone herself,” May said. “So I’m a little bit clone, a little bit wife.”

“I came here as a single parent in 1979, and all my competitors had wives. They’d come in to order drapes for the office, or whatever was needed, and I never had that. I said if I couldn’t get a wife, I’d get my daughter. Since I’m not marriage material.”

The self-deprecating humor draws another round of laughter.

Theirs is an easygoing bond, born of having such similar personalities. But has it ever worked against them?

“Not yet,” they both said in unison. And the laughter resumed. 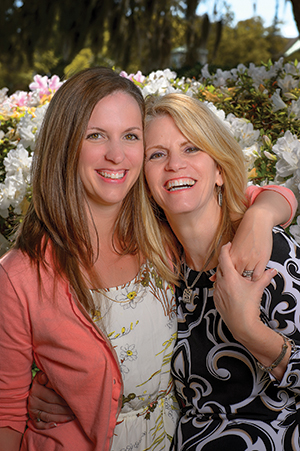 Sometimes the personalities of a mother and a daughter mesh so well that they complement each other perfectly. Sometimes so much so it can be hard to tell them apart. But what about when their personalities are so close that, as tends to happen sometimes with parents, conflict ensues? Can that too-close-for-comfort dynamic work in a business setting? If you were to sit down with mother and daughter team Barbara Blackburn and Brittney Sell, you’d know that it can.

For the last 18 months, the pair has been working together in the business that Blackburn founded 25 years ago, Compu-Pays Payroll Services. And while the smiles and laughter flow easily in the small office they share in Windmill Harbour, it wasn’t always like this.

“As close as we were, we used to have a volatile relationship,” Sell explained. “She was the mother, I was the daughter. If I stepped out of line, she’d throw me back in line… And when we started working together, the personality clashes that we thought would work against us actually helped us work together.”

A volatile relationship can add pressure to a business. However, combine the stressors of a small workplace, constant deadlines, and a newborn (Sell’s first-born daughter, who came to work with her until 18 months “She wasn’t very good at filing so we had to let her go,” Blackburn joked) and you have a unique kind of pressure — one that makes exquisite diamonds.

“There’s no one else I would trust more,” Blackburn said, exchanging a smile with her daughter.

Today, the two realize that the differences that may have made for a tumultuous few years now create a situation where one is the yin to the other’s yang.

“It helps us both,” Sell said. “If you have frustrations at work, a lot of times you can’t go to your boss about it, because you don’t want to seem like you’re complaining. But if one of us is about to blow their top, we really calm each other down.”

In addition to a cool rapport, the pair have also found a new respect for one another. Blackburn started the company in 1987 while working for Hilton Head Hospital. Over time, the client base for her side business grew to the point where she could do it full time in 1997.

“I just stepped out there and thought, ‘What’s the worst that can happen?’ At the time, it seemed so insurmountable,” she said.

“She went out and beat the pavement,” Sell said. “I could never do that. I came in here thinking I was a hotshot because I’d been a payroll manager elsewhere at large companies and thought I knew everything. Then I get here and my jaw drops seeing her take care of situations she’s presented with.”

And while they still find time to spar, it’s done with love and respect. 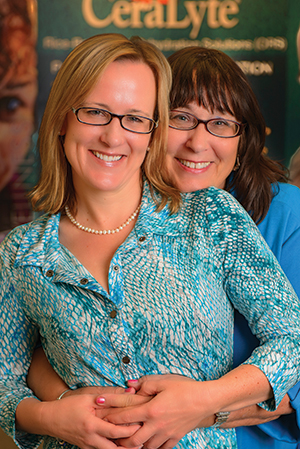 Sometimes, the worlds of business and family intersect in some profound ways. The world doesn’t always go according to plan. Tragedy strikes. And when it does, there’s no one who can help carry you through it like your children.

Charlene Riikonen formed Cera Products in Maryland in 1993 with an idea for a new kind of drink, that would take hydration to the next level. Working with doctors from Johns Hopkins and the Mayo Clinic, Riikonen was able to refine her original formulation for a rice-based hydration product until it had been perfected, patented and ready to ship. Now, the company is a global force, with specialized thirst-quenching hydration products aimed squarely at athletes, our troops and law enforcement.

Riikonen, along with her husband Esko, took the brand to astonishing new heights, establishing part-time headquarters in Hilton Head while maintaining ties to Maryland.

In 2008 Riikonen’s daughter, Jennifer Rapp, came aboard and utilized her medical background and natural athletic inclination to boost sales.

“I was a stay-at-home mom, with a degree in health science, and I’d worked for several health care companies,” Rapp explained. “I’d been involved in sales and was very successful at it.”

Rapp was learning the ropes handily, crisscrossing the country solo and with her mom, when her worth as a daughter-slash-employee became critical.

Esko was diagnosed with Stage 4 cancer. At their most optimistic, the doctors would only give him 10 months to live.

“Without Jenn around, it would have been even more devastating,” Riikonen said. “It was really critical, not only as emotional support for me, but also to keep the business running.”

In the face of that kind of loss and sadness, Rapp held down the fort while Riikonen traveled back and forth to Charleston for Esko’s treatments. This past September, after 18 months of fighting, Esko passed away.

The scars are still fresh, but the confidence these two have in one another and what they do refuses to falter. To hear them talk, they sound like nothing less than the perfect partners. Rapp, the laid-back rudder to Riikonen’s vivacious Type A personality. Riikonen, the coach to Rapp’s tenacious ability as a salesperson. It’s the best of both family and business, and the next generation is already getting involved.

“We just sponsored the Palmetto Bluff Half Marathon,” Rapp said. “And my four kids were all decked out in Cera Sport gear… they do flavor testing, too. They’re into it. They tell people at school about it. And they know Granny’s the boss.”

“It’s nice to have everyone together,” Riikonen added.

And as to the flipside of the mother-daughter dynamic, the one that can lead to the occasional butting of heads? These two have a way to manage that as well.

“The best thing is to have Jen make her case. It’s yes or no,” said Riikonen, adding with a smile, “But I’m the majority shareholder.”

Rapp returns the smile, adding, “She always tells me to write a report.”