This lighthouse is the first since the 1800s to be privately financed and naysayers have long-since called it “Fraser’s folly.” After rejecting a number of whimsical designs, Fraser and his team decided on the tailored look of red and white stripes – the Heritage colors – for the lighthouse exterior. 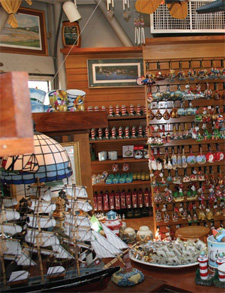 Perfectly positioned at the entrance of the Harbour Town Yacht Basin and as a backdrop for the final hole of Harbour Town Golf Links, the lighthouse is visited by thousands of tourists every year. The structure underwent a major renovation in 2001 and a nominal admission fee was added to offset maintenance costs. “We wanted to make the walk up the lighthouse more interesting,” said Thompson, who was in charge of creating the Lighthouse Museum four years ago. “The landings were a good place for bite-sized snippets of history.”

Each of the nine landings offers a display focusing on a particular perspective from island history: the Colonial, Plantation and Civil War eras; Gullah culture; the beginnings of modern development; the growth of Sea Pines; and contemporary Hilton Head Island.

Visitors can see everything from ancient pottery, dating back more than 3,000 years, to Gullah and historic Civil War artifacts, as well as lighthouse artifacts. Heritage and tennis memorabilia, donated by Stan Smith, are also on display. As an added bonus, guests can learn about other area lighthouses and hear spine-tingling ghost stories about the lighthouse and other various island sites. Toe-tapping Civil War tunes, Gullah spirituals, and modern day beach music play in the background during the climb. 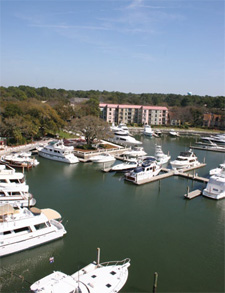 Once at the top, visitors are greeted with breathtaking views that span for miles, encompassing Calibogue Sound, Daufuskie Island and Harbour Town Golf Links. This spectacular site is now available for private parties, weddings, and other occasions for groups of up to 40.

The Top of the Lighthouse Shoppe carries island and nautical gifts, such as jewelry, Crystal World figurines, Harbor Lights collectibles, and a plethora of Christmas ornaments. It also carries artworks by some of the finest local artists.

Though the lighthouse was not intended to serve as a navigation aid, it does appear on some navigational charts. The light at the top flashes for two of every eight seconds and can be seen up to 15 miles away.

The Lighthouse Museum and Top of the Lighthouse Shoppe are open 10 a.m. to 8:45 p.m., seven days a week. Admission is $3; children under five can visit for free. For more information please call (843) 671-2810, or visit harbourtownlighthouse.com. 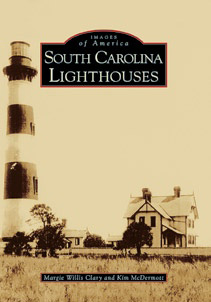 In Images of America: South Carolina Lighthouses (Arcadia Publishing, $19.99), Margie Willis Clary and Kim McDermott delight readers with historic photographs and local lore. Learn about The Lady In Blue – the ghost that haunted the island’s original lighthouse, The Hilton Head Light. See old photos of the Haig Point Light and its keeper, Carles Sisson; Bloody Point Light, and even lighthouses from Parris Island to Charleston. Book is available at local retailers, online bookstores or through Arcadia Publishing at arcadiapublishing.com.