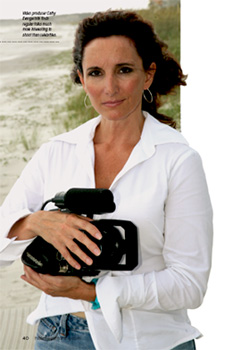 “I think everybody thinks about it in one way or another. The idea that my story should be preserved whether in writing, audio or video,” said Evangelista, who points out that a video biography is a very special way to share your story with your family and preserve it down the line.

Evangelista brings the right back-ground to the task of creating professional video productions.

She studied television production and theater at the University of Minnesota, earning a bachelor’s degree in communications, and put her education to work in television news as an editor, reporter and anchor.

Her television work also includes producing and hosting a cable talk show, and she spent time as a working actress in commercials, training videos and even some TV pilot episodes.

Her video production work has taken her to places as far away as Ghana where she shot a marketing piece for Opportunity International, a charity that provides micro-loans for people to start businesses in third world countries.

She also recently traveled to Italy to shoot a centuries-old villa, Villa le Piagge, as well as a travelogue for Tuscany.

Ye t with all of those globe-trotting opportunities in her line of work, Evangelista’s real love is the work she does with Video Memoirs.

That’s my baby,” said Evangelista. “I love talking with people and learning their stories.”

The biggest challenge in creating a video memoir is getting ordinary people to admit that they have a story worth putting to video.

For the most part, Evangelista’s subjects are unfamiliar with being in front of the camera and any are simply too humble to think that their life stories are worthy of the spotlight.

“People get nervous because they think they’re not going to remember things, or they think they’re boring,” she said. “That’s why it’s important to do this professionally. I am there to bring up things that will stir up memories. There are all kinds of ways to make people feel comfortable. I can hide the camera, for example. If I have to spend a whole day with a person before we shoot anything, I’ll do it.”

The stories that Evangelista captures can be anything from thrilling to deeply sentimental.

“I talked to one gentleman who served in the merchant marine during World War II,” she recalled. “He started out saying ‘I didn’t do anything in my life,’ but once he got going about the war, it came out that he had saved his buddies’ lives while in Italy. It’s just amazing the kind of stuff that starts to come out when you let people reminisce.”

Evangelista stresses that if you think about creating a video memoir; you should not wait too long.

“I remember one man whose eyes would tear up whenever he spoke of his wife,” she said.

Unfortunately, she passed away three months later, but fortunately not before having the opportunity to witness her husband speak of her in that way.

“That’s why I always say you shouldn’t wait because you never know what’s going to happen,” she said. “I am always coming across people who wish they had taken the time to do this.”

The style and scope of Evangelista’s video memoirs is as varied as the people she films.