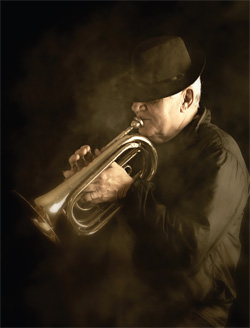 It took several years to overcome that image. As more local musicians began to play the venue however, local patrons came to regard The Jazz Corner as a nice place to go for an evening out.

Today, about 80 percent of the performers are local.

The idea for the club began in 1998, when Charles Swift, noting a void in the musical variety available on the island, approached Masteller and asked him to join forces to build a jazz club.

Masteller, whose father had been a prominent jazz musician in New York, said he was interested only if they could do it right.

“We knew what we wanted to do with the acoustics, because we knew what a bad room sounded like,” he said. They bought the space, gutted it, and hired KRA Architects to handle the design and architecture. Careful attention was paid to the acoustical elements to ensure that it sounded “right.” 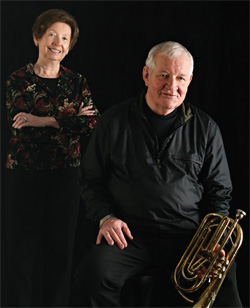 They listened to her, and their eclectic menu, prepared now by acclaimed Chef Mark Gaylord, is a hit with regulars.

The third essential element for success for a jazz club, Masteller said, is ambiance. This is accomplished by the intimacy of the space and the people who frequent it, including musicians, customers and the staff.

The year-long 10th anniversary will focus on a lesser known aspect of the club, the Junior Jazz Foundation. Created in 2005, the foundation provides scholarships for young jazz musicians, instruments for children who can’t afford them, music camp tuition, and free master classes for youngsters, Masteller said.

Highlighting the year will be a series of 10 weekend concerts through spring and fall, each one featuring a different focal point of jazz.

“We’ll be getting sponsorships for each one, so that funds raised can go back into our foundation,” Masteller said.

The past 10 years have been a learning experience, said Lois Masteller, the club’s hostess.

“We have created something that has value, to the community and to the musicians who play here,” Bob Masteller said.

“And we couldn’t have done this without all of them,” Lois added.

For more information or to make reservations, please call (843) 842-8620 or visit thejazzcorner.com.

The Jazz Corner At A Glance

Location: The Village at Wexford, Hilton Head Island
Hours: Doors open at 6 p.m. Performances begin at 8 p.m. with an intermission around 9:30 p.m.
Contact info: (843) 842-8620 or thejazzcorner.com – schedule of upcoming events and other information available online.