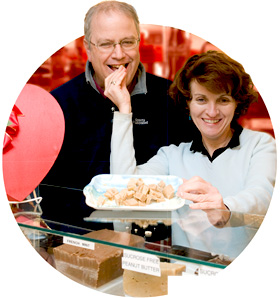 The making of fudge, that delectable, irresistible  and  potent confection locked into the memories of our youth, has been called a science.

For Gus and Maureen Robinson, long-time purveyors of Island Fudge Shoppe in Coligny Plaza, it could be called psychology.

“We find out what the customer wants, if it’s just plain chocolate fudge or one of 20 flavors,” said Gus, who earned a degree in psychology from Davidson College.

The Robinsons have gotten good at making fudge, chocolates, pralines and other candies since they bought the business and recipes from original owner Jerry Weber in 1990.

“I majored in psychology, not chocolate,” Gus said.

The couple, who have three children – Sarah, a 19-year-old sophomore at the University of South Carolina, and Michael, 11, and David, 10 – met while working in food and beverage in the hotel business in Washington, D.C., and decided to move to South Carolina to be closer to family (Gus is a native of Columbia).

The Hilton Head couple wanted their own business, and they learned that Weber wanted to sell Island Fudge, which he opened in 1981.

“Working for a big hotel corporation, we were tired of them working us to death,” Gus said. “Jerry had built up a lot of contacts in the confectionary business, so it was pretty smooth taking over.”

The Robinsons worked hard to expand the business, targeting more walk-in, tourist traffic while continuing to build upon a healthy local customer base. They branched out into commerce branding, designing chocolaty logos and designs and infused more energy into mail-order business.

“It keeps us busy in off season,” Gus said. “Frequent visitors to Hilton Head will order by mail, or order when they come to the island and have them shipped home or to their friends.”

Christmas is a large volume time, as is Valentines Day – oh, the lovers love their chocolate.

“Valentine’s is big,” Maureen said. “It’s a fun holiday for us, too, because we get to see all our friends we haven’t seen in a while.”

All of this sinful sweetness – though the Robinsons are making more and more sugar-free confection – is made pretty simply.

The Island Fudge Shoppe uses a propane gas-powered copper kettle to make “boardwalk” fudge, which is poured into pans in flavors from pumpkin and maple walnut to French mint and Irish creme, and a chocolate mixer “that always has chocolate in it,” said Maureen.

“Before we say no to a custom chocolate or fudge request, we’ll try to do it,” Gus said. “ We could have a hundred different flavors, and we’d still sell plain ol’ chocolate 50 percent of the time.”

And, the sour economy hasn’t seemed to dampened the hankering for the sweet stuff. “People still eat their chocolate,” Gus said.

It is the psychology of fudge.