Nimble, safe and efficient, the Biotrike makes its mark. 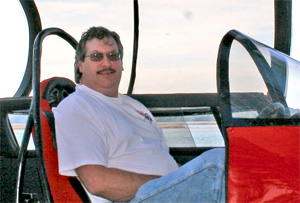 The automobile of the future has arrived and it doesn’t look or perform like the one parked in your garage. To begin with, it has three wheels. It can also run on fuel derived from vegetable oil and electricity, and can take you some 800 miles down the road before sipping the last drop from its 9-gallon tank.

The Biotrike is the brainchild of John and Julie Giljam, the heart and soul of Cool Amphibious Manufacturers International (CAMI), creators of some of the most imaginative vehicles ever devised. Their credits include a 49-person tour bus, an RV and sports car, all of which happen to be amphibious.

And now John Giljam’s imagination has kicked into overdrive with the Biotrike, a “reverse” tricycle with two wheels in the front and one in the back.

Last November their diesel prototype vehicle was featured on “Good Morning America” where it received rave reviews during a test drive through Manhattan. The local praise has been just as vocal.

“We’ll leave our house in Bluffton and go out to dinner or to a movie and the response is just incredible,” Julie Giljam said.

The tires are much like those you’d find on any car, but its teardrop, aerodynamic body is more like that of an aircraft fuselage. The Biotrike stands just over 4 feet high and stretches some 14 feet in length. Perhaps its most distinguishing feature is the mileage it can wring out of a single gallon of fuel. The production model of the Biotrike will garner an eye-popping 100 miles per gallon of bio-diesel or regular diesel. 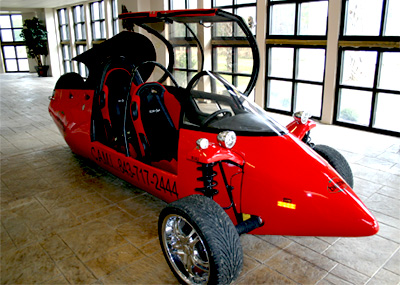 “We wanted to create a vehicle that anybody can drive,” Julie said. “We decided to build a vehicle for fuel economy and consumer economy. We wanted it to be a daily commuter that was reasonably priced and that would burn clean fuels.”

To maximize fuel efficiency, they designed the Biotrike with a Caterpillar diesel engine which powers six standard 12-volt golf cart batteries. As the batteries are drawn down, the diesel-powered generator follows up with a recharge.

Progress on the Biotrike has been nothing if not lightning fast. Designs for the vehicle began in April of 2008. Since then, of course, the U.S. economy has been transformed.

While recent upheavals in the broader economy have been difficult for just about everyone, the Biotrike promises a new level of economy for consumers. The two-passenger vehicles start at $23,999 and the four-passenger vehicles at $29,999, but the fuel efficiency pays a hefty dividend with every passing mile. The arithmetic is on the Giljams’ side, and so is this unique couple’s chemistry.

Julie has lived in the Hilton Head Island area off and on since 1989, but in 1997 she and John decided to make the move permanent. They purchased a home with some acreage in Bluffton, and their company now has a plant in Ridgeland and a second in upstate New York. Their boundless imaginations, which have braided themselves together over the years, have been the keys to their success. And it’s this singular, indispensable ingredient that they happen to have in abundance.