BOEING SPREADS ITS WINGS ACROSS THE LOWCOUNTRY

The Lowcountry, known for historic communities, thick marshlands, diverse wildlife and oceanfront playlands, is also the home of a major global aircraft manufacturer.

Boeing South Carolina in North Charleston, combined with a sister plant in Everett, Washington, has produced more than 1,000 Boeing 787s, which are designed for long-haul and international flights. The company touts its production as “From Freezer to Flight” because the carbon fiber used in the planes arrives in a freezer.

The aircraft maker’s presence in the state goes beyond the planes it builds and the approximately 5,700 people it employs. It is a generous giver to non-profits around the state, including in the Lowcountry.

Its most visible impact on the local community is as the presenting sponsor of the RBC Heritage golf tournament at Harbour Town Golf Links. Less visible is the company’s support of Science, Technology, Engineering and Math education initiatives across the state.

The Boeing name first appeared in South Carolina in the late 2000s when it bought two of its aircraft suppliers in the Charleston area, and then developed a final assembly building for Dreamliner, and eventually expended to include a new north campus in Ladson. 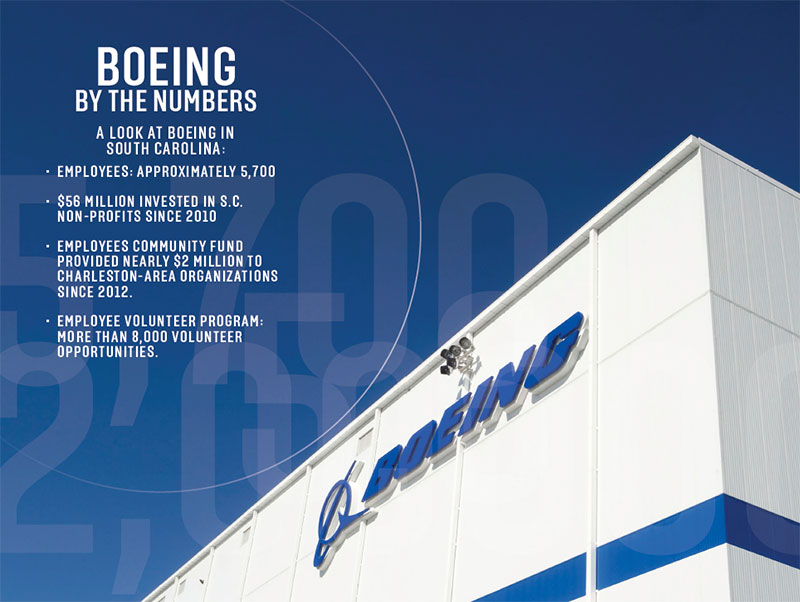 There is also a propulsion facility that makes nacelles for 737 engines. Other operations at Boeing South Carolina include: IT Center of Excellence and Engineering Design Center.

Finally, Boeing South Carolina said it partners with more than 300 suppliers across the state.

The first airplane rolled out of final assembly and took its inaugural flight in the spring of 2012. That plane was delivered to Air India later in the year.

The three versions of the 787 are all built in North Charleston, and about 70 percent of Boeing’s commercial airplane sales are to international airplane operators. Workers fabricate, assemble and install interiors for the plane’s rear fuselage and integrate it with the midbody fuselage. The combined sections are then moved to final assembly. The forward fuselage, wings and tail cone are made elsewhere and brought in to complete the plane.

Community is part of Boeing’s presence in South Carolina. It has given out more than $56 million to non-profits. Another example of Boeing’s community presence is its support of STEM education. Currently, more than 850,000 middle and high school students have gone through its DreamLearners Program and Speakers Bureau since 2012, the company said.

That number spiked in the past year as the coronavirus forced the program to become virtual. The company expects the number of students reached to hit one million by the end of the year.

The Hilton Head-Beaufort-Bluffton area had more than 1,762 students participate in DreamLearners between 2013 and 2021 in either the onsite program or through its speaker’s bureau, the company said.

Boeing is proud of its environmental stewardship. Boeing South Carolina was the company’s first 100 percent renewable energy site. Solar panels on the 787 Final Assembly building generate up to 2.6 megawatts of energy to power the facility and other areas. Boeing also said that no waste generated at the campuses goes into landfills.

The company also helps veterans transition back to civilian life.

“Boeing has been a part of the South Carolina community for more than a decade, providing meaningful careers for our teammates who continue to innovate the aerospace industry,” said Lane Ballard, vice president and general manager of the 787 program and Boeing South Carolina site leader, in a statement from the company. “We are grateful for the strong partnerships across the state that have contributed to the development of an advanced and growing manufacturing community, and we look forward to a long future in South Carolina.”

Boeing by the numbers

A look at Boeing in South Carolina: