FOR CLOSE TO 25 YEARS, JEFF HERRIN HAS HELPED NOVICE AND ELITE PIANISTS STAY IN TUNE

He is one of the most revered musical technicians in the South, the behind-the-scenes secret weapon for local staples like The Jazz Corner, The Hilton Head Symphony Orchestra and the Hilton Head International Piano Competition to industry titans like George Shearing, Harry Connick Jr., and Bruce Hornsby.

If you want the best sounds coming from your keys, Jeff Herrin is your first and only call.

“My 140-IQ cousin taught me this skill, and at first I hated it because it felt too hard to master,” said the owner of Bluffton’s Herrin Piano. “I stuck with it and I realized it was a gift given to me to understand the subtleties and the nuance behind the sound. There’s something about a piano. To sit down at a finely-tuned grand piano, to hear the string vibrate the sound to your ear perfectly, there’s just nothing like it. Four decades into this, it still thrills me every day.”

The Baxley, Ga., native made his way to Savannah in the 1980s, intent to focus on church music ministry. But the more he was exposed to piano tuning, the more he wanted to learn. During his time at Armstrong Atlantic University, he went for higher training that led to his becoming the area point person for tuning pianos ahead of concerts.

Herrin’s Lowcountry story began when he served as music director at Central Church in the mid ‘90s. He met his wife, Jennifer, at the church and the couple married in 1997 and moved to Rose Hill.

His legendary status took root on the island on the night of the 1999 opening of The Jazz Corner. He was paid to spend the day at the venue tuning a nine-foot concert piano for first-night headliner, British icon George Shearing.

Herrin impressed Shearing that night, but it was just one of countless accolades from industry titans. He’s tuned for Bruce Hornsby at Sea Pines, Marvin Hamlisch before an Arts Center concert, three times for Harry Connick, Jr. before Savannah concerts, and even tuned for Bob Dylan.

“I’ve been fortunate to be the right man in the Rolodex at the right time,” Herrin said. “They’ve all been happy with the results, so that doesn’t hurt in terms of staying atop the Rolodex. I feel like I’m the best I’ve ever been right now through experience.”

Hilton Head International Piano Competition piano supplier Steinway has called on him to tune the pianos at most of the host families’ homes and at the competition. He will be tuning again this year for HHIPC’s Bravo Piano! Festival, set for June 4-12 throughout Bluffton and Hilton Head. 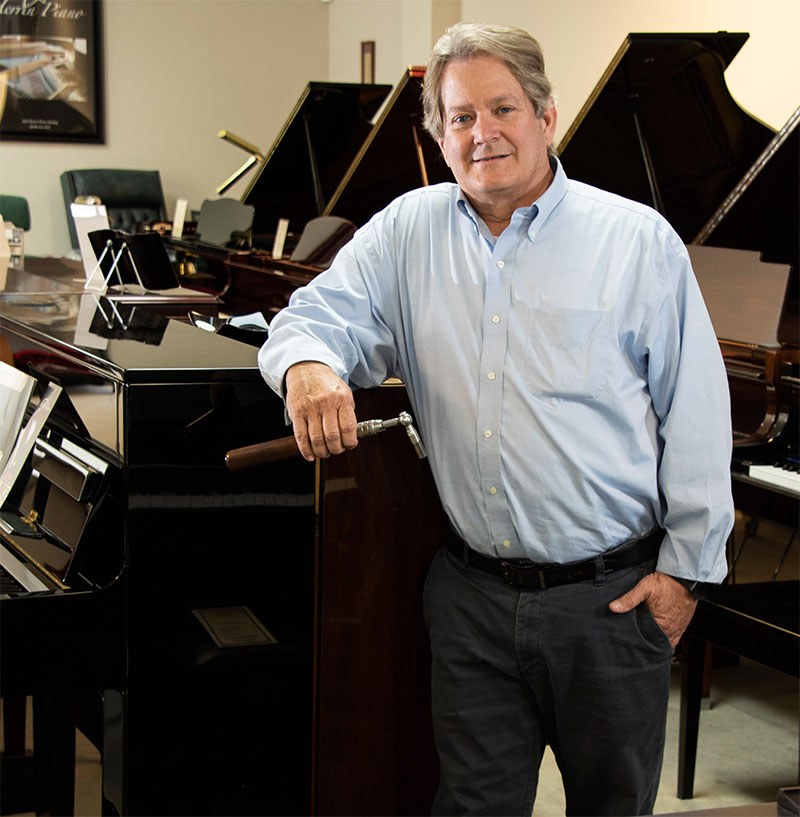 The Herrins have consistently expanded their piano empire. Jeff went from tuning and tech services to providing piano moving services and piano rentals for concerts and events. In 2014, he and Jennifer opened up a retail location in the Okatie Riverwalk complex, in part to sell clients’ pianos he had tuned through the years. The business moved to a larger location in Bluffton’s Sheridan Park in 2018, where he sells everything from a $450 weighted key digital piano to a $38,000 used Steinway Model L (a new one can fetch $90,000).

The industry has changed massively. The U.S. dominated pianos with 200 manufacturers in the 1970s to just two today as Asian makers like Kawai have become the gold standard.

“I adore Kawais. The tone is sweeter than others and it has tuning stability. Year to year, they stay in tune better than any other piano,” Herrin said.

Wouldn’t that be bad for business?

“My goal is not to have to tune them year to year,” he said. “I love the music and the geniuses who dare make the music, so I want them to have a long-lasting experience.”

Herrin is providing services that many of his first-time customers figured they’d have to go to far-flung places like Atlanta to receive. He hopes that one of his three children Joel, 20; Julia, 19; and Jenna, 16 – will want to carry on the family legacy (Julia, a piano performance major at Auburn and Miss South Carolina contender, is the current best hope).

“The piano is timeless, it’s a soothing masterpiece,” Herrin said. “You find the right piano and keep it tuned, it plays like new 50 years in. I take great pride in being the go-to piano man that keeps them sounding new.”