She moved off-island to nearby Savannah for her teenage years. While in Savannah, she began to yearn to go back home to the quiet island life. When she made her way back to Daufuskie, she arranged to live in one of the Gullah cottages, educating and cooking for guests. 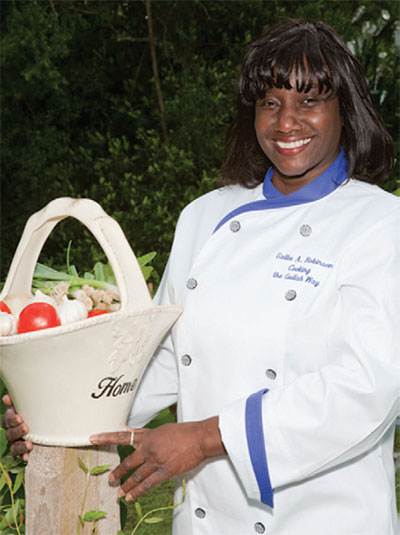 She’s worked tirelessly ever since to raise money to repair other historic homes for the families to preserve the Gullah history and culture despite development.

“That’s my goal right now,” Robinson said. “Leaving a legacy for the generations to come.”

Part of that legacy is the food memories that she shared with her family. Everything was sourced on the island, with little waste. Gardens were grown by the house in the verdant, unspoiled soil, full of cucumbers, watermelon, greens, cabbage, okra and tomatoes.

“You could smell that richness, even in the tomato vine. We would pluck them off and bite into it,” she said. “People say they taste like butter, but I feel it’s like magic.”

Sallie Ann’s mom grew her own garlic and peppers for seasoning, keeping the food foremost in her meals with minimal seasoning, only a little salt and pepper. They were organic gardeners by default, using wood ash from the stove to dust leaves to prevent bugs.

Seafood was caught straight from the ocean that flanks the island, into the pot the same day. Fish, crab and shrimp were integral parts of the Gullah dishes on Daufuskie, and of course, Sallie Ann’s parents and grandparents knew the spots to find fat, briny oysters.

“Taking crab straight from the ocean, boiling them and opening them up, the taste buds are at a different level,” she says.

The woods provided wild game, also cooked or preserved immediately. There were plentiful wild plums on the island as well, red and yellow versions able to be picked ripe from the trees.

Breakfast might be anything from fried crab, smothered shrimp and grits or bacon or ham cured from the pig that was raised and killed. Grits was always present for the morning meal and eggs from the chickens in the yard were plentiful. The whole family worked to grow, harvest and prepare each meal.

Lunch might be a brown paper bag filled with a fish or ham sandwich.

“Honey, that was the bomb,” Sallie Ann says.

Sallie Ann recognizes the value of a meal that hard work produced. “The joy of a belly full soothes your soul with its richness. It makes you whole. All of the hard work, the meal made it seem like it was well worth it. It was beautiful.”

Those from-scratch creations made Sallie Ann respect food and the process that filled her plate. It also gave her the basis for a long career educating visitors through their stomachs. She cooked Gullah food at the Smithsonian National Museum of African Arts and appeared on the Food Network and Georgia Public Broadcasting.

At night, when the stars come out without any distraction of city lights, she takes a minute to reflect. “I go outside and thank God for every moment.”