EXIT 3 PROJECT EXPECTED TO BE ECONOMIC BOON TO LOWCOUNTRY

Hardeeville Mayor Harry Williams will tell you — in clear, certain terms — that a ballyhooed Exit 3 off I-95 is not just another off ramp to a busy highway.

Williams — and others across the Lowcountry — are thinking bigger. Much bigger.

He calls the promised Exit 3 in Jasper County a “corridor of opportunity.”

U.S. Sen. Lindsey Graham said it will be “transformative.”

Gov. Henry McMaster extols the exit as “an economic engine.”

And state Sen. Tom Davis said Exit 3 has the potential to “lift all boats” in the Lowcountry economy.

The project — formally launched in September after more than a decade of discussion — is the subject of big talk and great expectations. Supported in part by more than $56 million in state grants and loans, Exit 3 is touted as a key to unlocking thousands of acres for development of manufacturing, warehousing, distribution and industrial investment in an area roughly between I-95 at Purrysburg Road and the Port of Savannah.

Strategic pieces in the mix include the RiverPort Commerce Park in Hardeeville and the expected Jasper Ocean Terminal — existing, ambitious initiatives to link hinterland development in South Carolina with increasingly modernized shipping on the Savannah River and Port of Savannah.

Proponents say the overall effort will convert Jasper County into a hot spot for growth, jobs and tax revenues.

It’s unclear how fast and how far-reaching this will be. But Williams and others say early progress provides a glimpse into a future when students and under-employed Lowcountry residents will have improved job opportunities to move up the economic ladder. 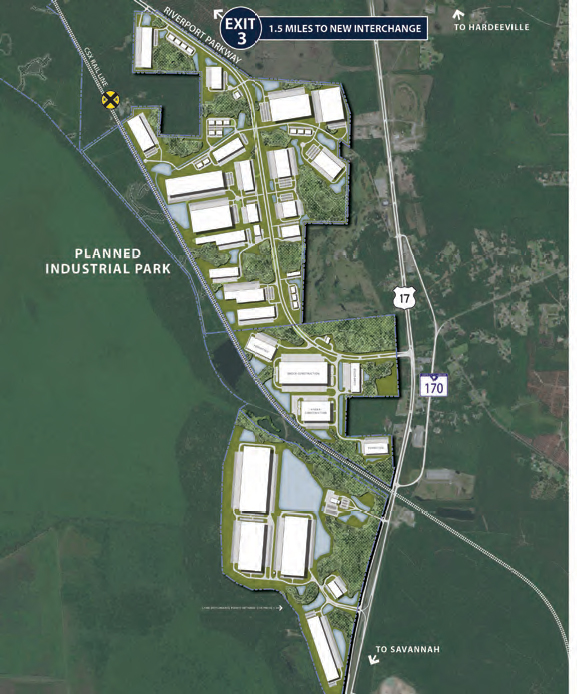 Leaders from government, education, non-profits and business are working collaboratively to identify and implement training programs, said Williams and Mary Lee Carns, vice-president for Institutional Advancement and External Relations at the Technical College of the Lowcountry.

“All the moving parts are moving together,” said Carns, emphasizing that job training programs are being developed to prepare workers for a variety of workplace needs, from building trades and computer programming to logistics and machine tooling.

The goal, she said, is to “be ahead of the curve and the upcoming opportunities that Exit 3 will create.”

As an example, Williams points to eight recent graduates of a welding certification program hosted by Hardeeville and supported by grant money from the EJF Philanthropies, an umbrella group for charitable giving formed by securities industry veteran Emanuel (Manny) Friedman.

“Now they have a path forward,” said Williams, who noted the students also earned certifications for forklift operation and OSHA warehouse safety.

Williams said the Exit 3 initiative likely will spawn an ecosystem of “spec” buildings — offering hundreds of thousands of square feet — to be filled by manufacturers, warehouses, freight forwarders and industrial companies.

Noting that “Amazon has changed everything” in the world of storage, supply chains and speedy delivery, Williams said the Exit 3 project is ideal because it links highways, rail lines, ocean shipping and available land.

The jackpot, he said, would be for the area to attract a major “OEM” (original equipment manufacturer). Exit 3 supporters point to Charleston-area growth — a ripple effect — that has accompanied decisions by Boeing and Volvo to locate plants north of the city. Big OEMs usually attract supplier plants and services, as well.

Sen. Davis said the Boeing and Volvo arrivals boosted the economic health throughout the Charleston area, contributing to greater affluence, a housing boom and retail development in areas such as Mount Pleasant and beyond. The ripple effect from the Exit 3 project could produce similar outcomes beyond Hardeeville and Jasper County, stretching into other parts of the Lowcountry.

“This sort of thing begats other growth,” Davis said. “It’s going to do nothing but benefit areas like Beaufort, Bluffton and beyond.”

“Beaufort County joined SouthernCarolina Alliance with a desire to diversify their economy. Exit 3 enables us to bring manufacturing into well-planned industrial parks close to the ports, yet close enough to give Beaufort County residents better job opportunities in a sector other than hospitality. The development of other industry sectors – such as aerospace, life sciences and automotive manufacturing, along with jobs in research and development – will provide a balance and buffer when one industry sector takes a hit, as hospitality and tourism did during the 2020 pandemic.”

Davis said success in development from the Exit 3 project and other initiatives should be carefully managed to preserve Lowcountry beauty and environment. Looking down the road, he said, he intends to advance bond proposals for public and private land acquisition and preservation — “at fair market prices” — to limit development density and preserve Lowcountry charm and character.

While embracing growth, he said, Lowcountry leaders must also take care to “protect what we have.”