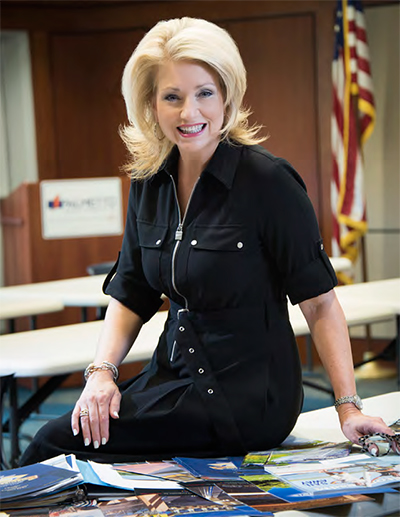 Missy Santorum isn’t quite ready to slow down. Not even close.

She’s still passionate about helping her community, still excited to meet other people and try to make a difference.

Santorum, who grew up in Knoxville, Tenn., and graduated from the University of Tennessee, met her future husband, Dan, on Hilton Head in 1984. The next year they were engaged, and she relocated to the Lowcountry.

Santorum instantly realized there was something unique about the cooperative. She met employees who had been there for decades. She relished Palmetto Electric’s customer-friendly approach. She realized she wasn’t working each day alongside co-workers, but instead was working with a newfound family.

“The company is fabulous,” she said. “I loved that they wanted to be involved in the community.”

Getting the word out to the communities in Beaufort, Jasper and Hampton counties has been her priority, from press releases to social media posts. The technology has evolved, but the goal remains the same: inform the public.

Keeping the community informed is a way Santorum and Palmetto Electric show appreciation for their customers, she said.

“It’s so important to communicate with the people, to let them know what’s going on,” she said.

Santorum has been a part of Palmetto Electric’s efforts to keep the public apprised of happenings through hurricanes, snowstorms and the coronavirus pandemic.

During Hurricane Matthew in 2016, Palmetto Electric reached its customers by expanding its social media output, including utilizing Facebook Live for the first time. From radio and TV interviews (sometimes at midnight) Santorum and the cooperative made it a priority to connect with the community.

“Whatever we needed to do,” said Santorum, who spent five nights during the week of the storm sleeping on an air mattress at the New River office.

“We wanted to let our members know that our community was hurting, and how people can help,” she said. “These are our neighbors and telling that story is so important.”

Palmetto Electric, which regularly posts on Instagram, Facebook, Twitter and on its YouTube page, has been a proponent of giving back to the community. Santorum helped start initiatives such as the Bright Ideas program and the Million Dollar Hole in One.

Bright Ideas, which began in 2004, is a grant program that awards funds for innovative classroom-based education projects. Teachers in Hampton, Jasper and southern Beaufort counties have received more than $550, 000 in grants since its inception.  The Million Dollar Hole in One event raises money in support of Bright Ideas.

Santorum’s desire to be involved in the community extends to the many organizations where’s she’s played an integral role.

Here’s a quick snapshot: Santorum is chairman of the South Carolina Commission on National and Community Service, which awards funds to areas in the state with critical needs; she’s been involved with Zonta Club of Hilton Head (which helps empowers women) for 30 years, including being named its woman of the year in 1997; and she’s on the United Way Association of South Carolina’s board of directors.

Santorum’s commitments never wane. And that’s just fine with her.

“I am a Tennessee volunteer, right?” Santorum said. “It’s ingrained in me. It’s very, very rewarding.”