No one was more surprised than Bill Robertson himself when he discovered a passion for tracking and killing bugs and unwanted pests.

But the more he thought about it, the more it made sense. After all, according to Robertson, his Marine training — “crawling on my belly” — had prepared him to eliminate an enemy.

At the end of this year, at age 71, Robertson will retire as general manager of Hilton Head Exterminators, ending a bug-battling career that spanned some three decades. Along the way, he earned a reputation among homeowners, business owners, developers, builders and colleagues as a skilled problem solver, a team builder and a go-to guy for results.

“I had never had any thought of going into the bug business,” Robertson said. “But I was like a duck to water. I kind of fell into it and found that I loved it.”

Robertson and his wife, Debbie, also fell in love with the Lowcountry in the years since the Marines assigned him to Parris Island in 1984. The couple put down roots in Beaufort County, raising two children and, at one point, serving as co-presidents of the Battery Creek High School booster club. For Robertson, the settled lifestyle was gratifying after having traveled the world — first as the son of a career Air Force officer, then as a Marine for more than 22 years.

“Those were the days when you could leave your office at 6 p.m., drive to Beaufort and pass about three cars,” he said. “How things have changed.” 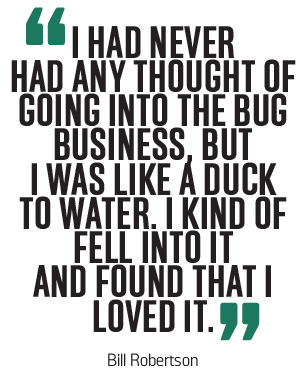 These days, Hilton Head Exterminators has more than 60 employees and operates from a modern facility on Hunter Road, as well as a branch in Bluffton. The company has grown to become the largest independently owned pest control service in the area, with Robertson developing a workplace culture lauded for customer service and a solutions-based staff of technicians.

“I’ve known Bill for many years, and I’ve always known him to be willing to drop everything to respond to a client and deliver customer service,” said James Wedgeworth, head of The Wedgeworth Team and a leading Hilton Head real estate professional for some 40 years.

Added Marc Ellis, owner of Ellis Construction Co.: “Bill is pretty joyful, but he knows how to get down to business, stick to the particulars and put his knowledge to work. This community will miss him when he retires.”

Among Robertson’s loyalists is Darlene Gill, the company’s human resources manager and one of the handful of employees on the job when Robertson joined Hilton Head Exterminators in 1994. In a letter taking note of Robertson’s retirement, she cited lessons taught by Robertson over the years. Among those:

“The customer may not always be right, but they are ALWAYS the customer! No matter what someone says, we still have to treat that person with respect … We will work to do whatever we can to be sure that – when all is said and done – we have a satisfied customer.”