Each morning, 14-year-old Laney Scott puts on her favorite necklace, one she has worn every day for the past three years. It’s a necklace that reminds her on a daily basis of her own strength and resilience.

The necklace has three coins attached to it, each stamped with a different word. Laney said the words “strength,” “survivor” and “princess” helped her get through the most difficult times of her life.

When the Bluffton girl was just 11 years old, she was diagnosed with ocular melanoma, a type of cancer in the cells that produce pigment in the eyes. 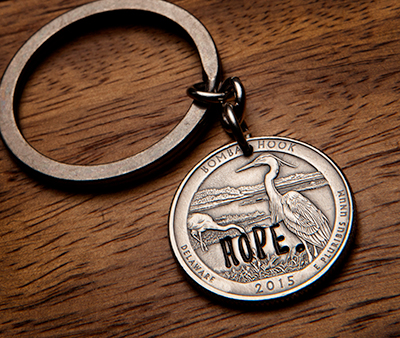 Laney had visited her optometrist for a yearly exam and was immediately sent to the Medical University of South Carolina in Charleston for testing. At first, the doctors thought she had glaucoma, but Laney’s mother said it turned out to be something worse. Laney had a biopsy on her left eye, and after 10 worrisome days of waiting, she and her parents, Mandy and Rob Scott, got the news that it was cancer.

“It was very hard news to take,” Mandy said. The day before Laney started radiation therapy, her mother’s friend, Dawn Wilkins, stopped by with a gift.

Wilkins and her sister, Julie Emery, own an online store called CHANGE., which offers inexpensive jewelry that is meant to inspire life change. The necklaces, bracelets and keyrings are made with spare change, usually state or state park quarters, that are stamped with an inspiring word, such as “brave” or “blessed.”

After Emery stamps the coins, she and her sister blacken them with metal blackener, then use stainless steel to clean them up.

Emery said people sometimes ask if it is legal to make jewelry out of coins. According to the United States Mint website, it is only illegal to alter a U.S. or foreign coin if there is intent to defraud.

The Bluffton sisters hope to change the world, one piece of jewelry at a time. The idea is that people will purchase multiple items to share with friends, family and even strangers. Each piece of jewelry is $5. Each item is packaged with an inspirational card.

When a woman from New Jersey contacted Emery about ordering necklaces for nurses on the front lines of the coronavirus pandemic, CHANGE. partnered with her so she could give 100 necklaces with the word “fearless” to the nurses. To show appreciation for teachers, CHANGE. donated 80 pieces of jewelry to a local school at the end of the 2019-2020 school year. 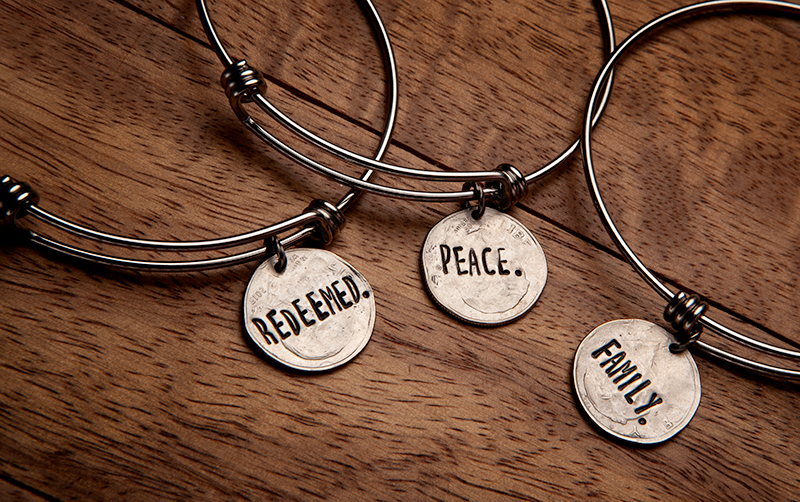 Emery said she has heard many stories from people who received necklaces with the right words at the perfect moment. An elderly man who had recently lost his wife teared up in the middle of a local store after being handed a necklace from a stranger.

“I feel God has been in it many times,” Emery said. Laney wasn’t the only one to receive a necklace from Wilkins the day she visited the Scott home. She brought extra necklaces for the rest of the family.

Wilkins said she and Mandy became close after Laney’s diagnosis because Wilkins had just been diagnosed with breast cancer. “Laney was such an inspiration to me,” Wilkins said. The day after Wilkins’ visit, Laney headed to MUSC’s Children’s Hospital, where she underwent a week of radiation. She had a patch sewn to her eye and was in pain.

Mandy sat by her daughter’s side, watching her go in and out of sleep because of the heavy pain medications.

“She was a lot stronger than I was during this time,” Mandy said. “She amazed me. She smiled through the storm.” 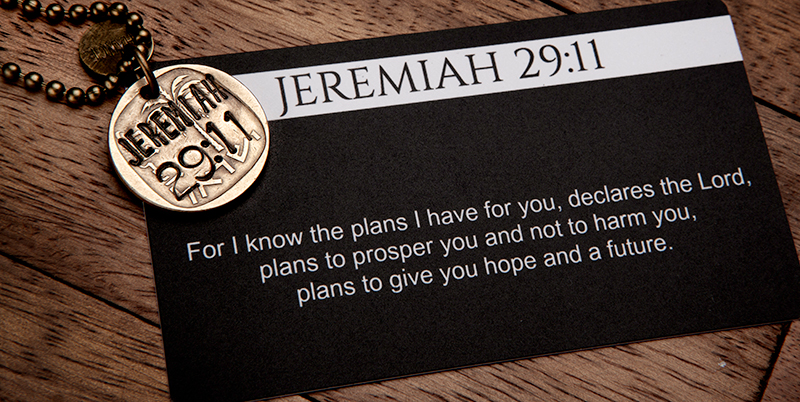 Laney is now cancer free and is a freshman at Bluffton High School.

She loves playing baseball with her family and cheering on the Yankees.

As she goes to bed each night, Laney places her special necklace on her bedside table and closes her eyes.

“It reminds me of what I went through, how strong I am and how I pushed through,” Laney said. “This necklace has really helped me go through a lot, and I’m very thankful.”