In 1920, American suffragist Carrie Chapman Catt founded the League of Women Voters. What began as an effort to help 20 million women cast their first ballots has become a power-ful nonpartisan organization with more than 700 chapters across the U.S.

This Valentine’s Day, the League of Women Voters will cele-brate its 100th anniversary.

“We’ve certainly been gearing up for the 100th anniver-sary of the League and also the 100th anniversary of the 19th Amendment, which will come in August,” said League of Women Voters of Hilton Head Island-Bluffton Area president Patricia Felton-Montgomery.

The local chapter will celebrate with an invitational reception Feb. 10 at All Saints Episcopal Church on Hilton Head Island.

For 100 years, the national League of Women Voters has encouraged citizens to take an active role in government, educat-ing them about various public policy issues and promoting public discussion of civic reforms.

Much has changed for women over the past century. Six months after the League was founded, the 19th Amendment was passed, granting women the right to vote. The Equal Rights Amendment was introduced in Congress just a few years later.

However, women still face many challenges: wage discrimina-tion, employment and health issues, domestic violence and sexual assault, among others. Ninety-seven years after the ERA was intro-duced, the amendment has not been ratified by the states. 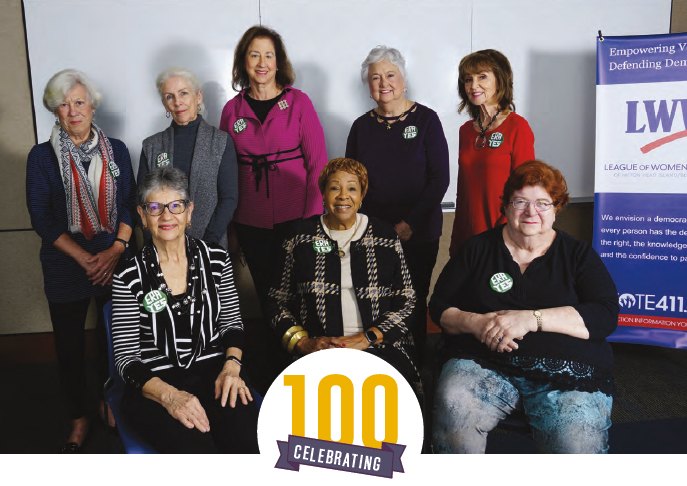 The League of Women Voters of Hilton Head Island was founded in 1981 and merged with the Bluffton chapter in 2010. Made up of nearly 200 members, the group meets once a month. Membership is open to anyone — male or female — age 16 and older.

In her quarterly newsletter to members, Felton-Montgomery reflected on the local group’s accomplishments in 2019. Among other things, she said members educated almost 5,000 voters, registered 364 new voters, and hosted five nonpartisan candidate forums that were broadcast live on county and town channels.

Felton-Montgomery said the group’s goals for 2020 include establishing an independent redistricting commission in South Carolina, supporting a complete and inclusive Census 2020, and passage of the ERA.

Felton-Montgomery would like to encourage residents to par-ticipate in the 2020 Census.

“We want people to understand that funding for community programs is based on census counts,” she said. “And therefore, it’s to all of our benefits to have an accurate count.”

Felton-Montgomery made the connection between the Census, redistricting and gerrymandering. Results from the U.S. Census are used to establish the number of seats each state gets in Congress. Redistricting is the process of drawing new congres-sional and state legislative district boundaries. Gerrymandering is when those boundaries are manipulated to benefit one party over another.

Felton-Montgomery said South Carolina is one of the most ger-rymandered states in the country.

“Those are critical, critical issues to our democracy,” she said. “These are issues that determine if we are a true democracy for every individual or not.”

To Felton-Montgomery, getting young people involved in pol-itics is crucial. The local league will continue working with high schools to educate students and help them register to vote. To help with that goal, the national voters league recently announced it will award the Lowcountry group a $700 grant.

“When I talk to younger potential voters, too many of them are disenfranchised with the whole process of voting because they feel their votes don’t count,” Felton-Montgomery said. “We want to engage them as much as we can because if you don’t vote, you don’t have a voice.”

«  Carrie Chapman Catt founded the League of Women Voters on Feb. 14, 1920, during the con-vention of the National American Woman Suffrage Association.

«  The Voting Rights Act of 1965 prohibited racial discrimination in voting.

«  League of Women Voters of Hilton Head Island was founded in 1981.

«  The National Voter Registration Act was passed in 1993.

«  The league launched an online voter information guide in 2006.

«  The Hilton Head and Bluffton chapters merged in 2010.

«  The local League of Women Voters ignited efforts to make South Carolina the 38th state to ratify the ERA in 2019.