25 YEARS AND $82 MILLION LATER, COMMUNITY FOUNDATION OF THE LOWCOUNTRY IS STILL GROWING

The world’s first community foundation was set up in Cleveland, Ohio in 1914. Eight decades later, the Lowcountry established one of its own, seeded with $20 million from the sale of Hilton Head Hospital.

Now, with a quarter century under its belt, Community Foundation of the Lowcountry continues to grow, having invested more than $82 million in grants and scholarships since 1994.

“Our mission is to strengthen community by connecting people, resources and needs,” says Chris Kerrigan, president and CEO of the foundation.

“Each community foundation is geared specifically toward the needs of its community,” Kerrigan says. “The needs here in the Lowcountry are different than in Boulder (Colorado), New York or Los Angeles. We’re really here to serve this community.”

Community Foundation of the Lowcountry constantly engages with the community, allowing it to focus on the most pressing needs. For example, the foundation gave more than $200,000 in grants for rebuilding in the wake of Hurricane Matthew in 2016. 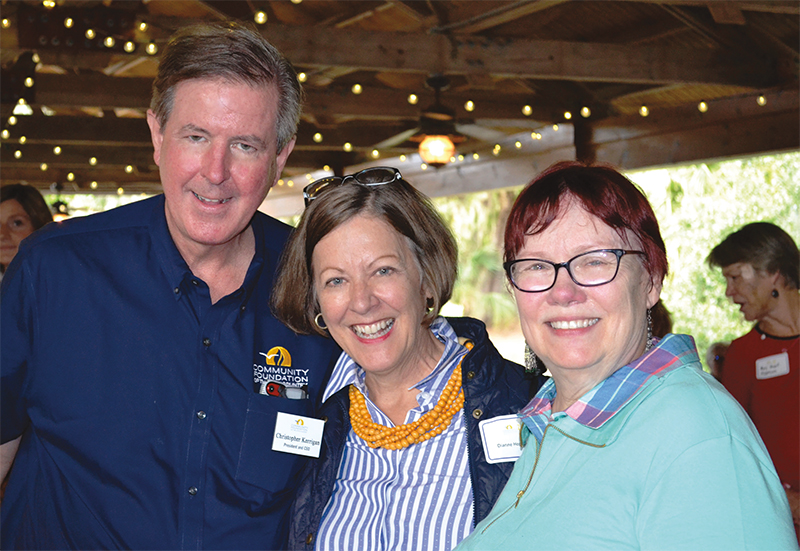 The foundation has nearly completed a $3 million campaign, Project Safe, to help low-income residents connect to the public sewer system.

“Compromised by the high water table and dense underground root sys-tems, some (area) septic systems are producing an overflow of contaminated waste water that threatens the safety and beauty of our island home,” accord-ing to the foundation.

In 2017, the U.S. Department of Housing and Urban Development recog-nized Project Safe with a HUD Secretary’s Award for public-philanthropic partnerships.

“Sewer may not be sexy,” Kerrigan says. “But it’s something that really impacts everybody in this region.”

A key part of the foundation’s mission is to help local residents fulfill their philanthropic passions by establishing funds that are not just easy to set up and manage, but also provide tax benefits.

“We are a community with a lot of retired people who have a lot of wealth — not just financial wealth, but intellectual and experiential wealth,” Kerrigan says. “They are willing to give, both financially and with time. We are really fortunate here.”