Advances in technology have made it possible for many professionals to work from almost anywhere. For those looking to keep their jobs but get away from the hustle and bustle of the big city, life on Hilton Head Island and in Bluffton can look very appealing: shorter commutes, lower costs of living and the slow pace of the Lowcountry lifestyle.

John Taylor, an economist with Black & Veatch Management Consulting, moved to Hilton Head in 2016 after spending most of his career as a remote worker. He said the area suited his desire to create a greater balance between his work and personal life.

“It’s beautiful here, and there’s harmony between working and playing,” he said. “When I worked in our Boston office, people stayed at the office until 8 p.m. on Friday ... every Friday. Here, people leave at 2 p.m. They go outside, spend time with friends and family, and just rejuvenate.”

Taylor is one of many who do their jobs from home, freelance or constantly travel for work who are migrating away from expensive urban centers toward cheaper cities and smaller towns, according to economists. “The livability crises of certainly the West Coast and some of the East Coast are clearly a push factor,” said Mark Muro, a senior fellow at the Metropolitan Policy Program at the Brookings Institution.

While Hilton Head Island and Bluffton haven’t received huge numbers of remote worker “transplants,” many of those who have moved here have skills tied to strategy, sales, marketing, business development and startups, all of which tend to translate well from one place to another. Some own small businesses.

The strong sense of community in the Lowcountry is also a draw for many — including Mark Perkins, who works remotely as a principal brand manager for Worldpay. He relocated to Bluffton from Denver, Colorado, in 2016. When his parents retired to Bluffton, he and his family decided to take advantage of lower real estate prices and lower taxes, selling their home. The biggest selling point for them, he said, was the area’s small-town feeling and the abundance of outdoor recreational activities, including boating and fishing. They also were excited about the opportunity to get involved in the community, and for his wife Lynette to be able to start a small photography business of her own.

“I’ve coached soccer and flag football for the recreation leagues, play in Cornerstone Church’s worship band, and I am involved with the Don Ryan Center,” Perkins said.

“It’s an easy flight up to Atlanta, and then anywhere I want to go,” he said. “Once, I was up at 4 a.m., took a direct flight to New York for a marketing meeting and dinner with our consultant, and was back home and in bed by midnight.”

As the number of remote employees continue to grow, the need for co-working spaces has also grown. In 2017, according to the Global Coworking Unconference Conference, there were 3,205 co-working office spaces in the U.S. That number has grown each year, including in areas like the Lowcountry, where the Don Ryan Center for Innovation is opening a coworking space called The Hub in Bluffton.

“Many people who work remotely want the advantages that co-working spaces can offer,” said Matt Green, chairman of the board for the Don Ryan Center for Innovation. “They want or need access to high-speed internet connections, state-of-the-art technology and software. They also need places to work independently, meet with clients, or hold larger team meetings. And for many, co-working spaces offer a sense of community that working from a home office just can’t provide.”

The Don Ryan Center’s goal is to supsupport individual workers and companies of all sizes, from entrepreneurs and freelancers to startups and large corporations.

“We also see friendships and business opportunities coming out of the space,” Green said. 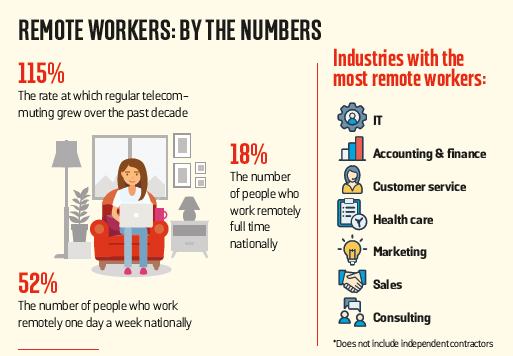 The Don Ryan Center for Innovation’s The Hub — a co-working space, business incubator and economic development headquarters — is on track to open in late fall at Buckwalter Place Commerce Park. It will feature rentable work space for up to 35 people, a large training/conference room that can be broken down into two smaller conference rooms, and two meeting rooms. Daily coworking space will cost $15 per day and $100 to $350 per month depending on the space desired. Members will have access to Mac computers with the Adobe Creative Cloud suite of software on a reservation basis, as well as the complete SOLIDWORKS suite of design software and a 3-D printer.