TEDX GETS LOCALS TO PRESENT IDEAS WORTH SPREADING

Throughout his career in human resources and management, Rex Gale’s easy, approachable style motivated employees. Now’s he’s motivating people on Hilton Head Island to take the stage and share their ideas. Gale presented the island’s third TEDx event last month, and between those who have spoken at the forums and the people who have come to hear them, much of the Lowcountry has taken note.

TEDx events are organized by curious individuals who want to discover ideas and spark conversations in their own community. After Gale was invited to be a speaker at TEDx Creative Coast in Savannah in 2014, he was hooked and decided to start a TEDx series in the Lowcountry. 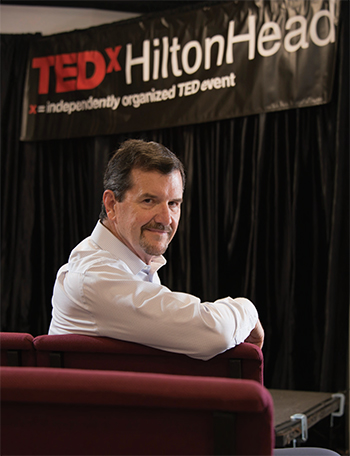 “Hilton Head has always attracted people with tremendous life experience and tremendous business experience. I thought that we need to be doing this here,” he said.

TEDx events include live local speakers and short segments of recorded TED Talks, and are organized independently under a free license granted by TED. All the organizers are volunteers, as are the speakers. The license requires that any profits from a TEDx event must be reinvested in the production of the next one. Gale’s organization has nonprofit status through Community Foundation of the Lowcountry.

TED — which stands for technology, entertainment and design — focuses on “ideas worth spreading.” The speaker series launched in 1984, and there are now more than 1,400 TED Talks available to view online.

Gale recently retired as national acount director of sales with BlueCross BlueShield of South Carolina; he also spent many years as a business consultant and has worked with many of the world's most successful companies in designing programs to achieve optimum levels of health, prosperity and life in general. He said that more than a decade after a gathering known as Renaissance Weekend left Hilton Head, he aspired to create a similar intellectual event that would highlight lessons from speakers’ personal experiences.

TEDx Talks fit that description. They are short — each is less than 18 minutes — and organized around a specific theme. Local organizers follow a set of ground rules dictated by the national TED organization, but can choose their own themes, speakers and venues.

Ahead of the May 11 TEDx Hilton Head event, the 19 presenters worked with coaches Jean Jude, David Premo and Laura Hill to help perfect their deliveries. The theme of the event was “Reinvention.” Organizer Debbie Lyons has acted as emcee.

It was the third local TEDx event, and each has grown progressively larger. The next local TEDx event will be TEDx Women in December, and Gale expects the crowd to continue to grow. In May, the increased interest led local organizers to move from the rooftop bar at Posiedon in Shelter Cove Towne Centre to the larger SoundWaves venue near Coligny Plaza.

Speakers and their talk titles at the May TEDx Hilton Head event were: