HOW HARGRAY KEEPS THE HERITAGE WIRED

Since the first Heritage golf tournament in 1969, a lot has changed. Clubheads got bigger, pants got quieter and the ban on anchored putting has kept thousands of PGA Tour professionals from looking like giant goofballs on national TV. And as drives got longer, crowds got bigger.

The technology behind the Heritage has changed, too — and no one knows that better than Hargray. The local communications company — an indispensable partner of the tournament today known as the RBC Heritage Presented by Boeing for 49 years — has been keeping the tournament wired and connected since the beginning.

“It was a whole lot more work back then,” said Dwain Wright, who has helped keep communication flowing at the Heritage over the years. “Now, technology has advanced so much. We lay out less than half of what we did then.” 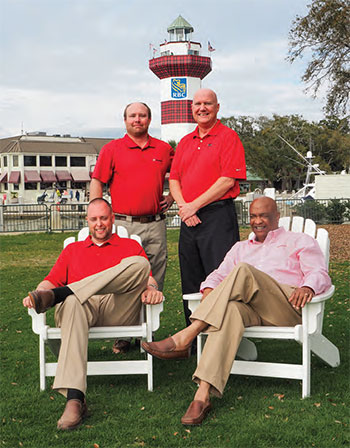 Of course, some things have stayed the same.

“The setup time is still similar,” said Hargray’s Henry McShane. “If you think about it, it’s like the building of a small town … We did copper back then and we’re doing fiber now, but we still have to get from point A to point B.”

That means getting a jump on the job well before play begins. The hidden phone lines that once crisscrossed the course have been upgraded, but a wired connection still is needed for things like vendor point-of-sale systems, the scoring trailer and high-speed internet in the media tent.

And while Hargray may not have to wire each skybox for a phone anymore, the need for constant communication has created new challenges.

Hargray is meeting that demand with new offerings, like live video of the tournament in skyboxes, tents and video boards at locations around the course, and free Wi-Fi near the 18th hole thanks to a bank of invisible Wi-Fi access points. The company is also providing communications infrastructure to law enforcement officials and dozens of security cameras.

“Back in the day we were doing a 1 MG or 56 K, now it’s upwards of a gigabyte,” said Bryan Rose. “We did do a gig last year and we’ll be doing the same thing this year with the possibility of doing higher bandwidths should the need arise.”

Laying 15,000 feet of wire in and around Harbour Town Golf Links is no easy feat, and it takes the team of four countless hours in the month leading up to the tournament. And they don’t get to relax once the pros tee off. 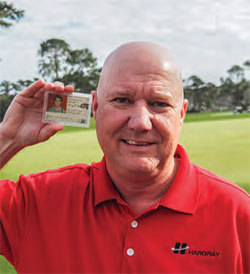 “We’re in fireman mode the week of,” McShane said. “We put in a lot of long hours, long days some weekends, so when the tournament starts, no one’s waiting on us.”

And, of course, there are the natural hazards that come with poking around among the bunkers and lagoons of Harbour Town.

“We’ve built some memories of one person splicing wires and one person holding off the alligator,” said McShane with a laugh.

And once the tournament ends? “We go back to work,” McShane said. 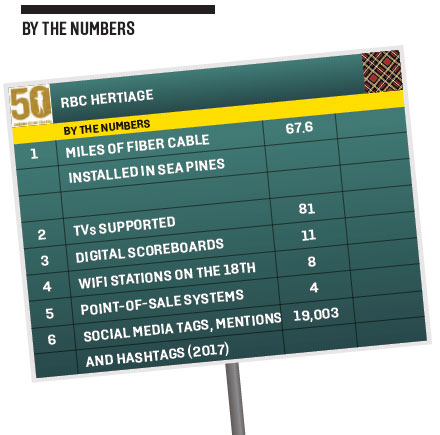