Many businessmen’s dreams have died on Daufuskie Island, but accomplished local developer Roger Freedman thinks he has a plan that could boost development and also solve the affordable housing crisis on Hilton Head Island.

Freedman retired in 2003 after an impressive career that included executive positions in banking, real estate, communications, leisure and biotechnology, including a 16-year stint at Chase Enterprises and six years as chairman and CEO of Agion Technologies. At that point, he turned his attention to developing the Broad Creek Marina on Hilton Head Island, now home to ZipLine Hilton Head and Aerial Adventure Hilton Head, as well as top-notch boating amenities, guided boat tours, and the Up the Creek Pub & Grill.

Now Freedman is hoping to work his development magic on Daufuskie.

Freedman’s company, Daufuskie Island Development, has an option to purchase three parcels of land totaling 1,150 acres on Daufuskie for $11.5 million — about 40 percent of the appraised value, which would allow for the development of affordable housing. According to the company’s website, approximately 650 developable acres will cost $18,000 per acre, compared with a cost of $400,000 per acre on Hilton Head, one of the biggest obstacles to developing low-cost workforce housing in the area.

The 735-acre Webb tract, fronting the Intracoastal Waterway, is zoned for the development of 1,250 single- and multi-family homes. Building the homes on Daufuskie, Freedman says, would help solve traffic concerns on Hilton Head by allowing workers to commute by ferry rather than coming from the mainland — in some cases from as far away as Hampton and Allendale counties.

“It’s the only potential solution that can have a large impact on the entire problem,” Freedman said of his plan to meet the Lowcountry’s need for affordable housing. “There’s no single solution, but there’s nothing else that will have anywhere near that kind of impact. If it’s not resolved, this really threatens the quality of life and the economic stability of our community, and it affects every facet of it.” 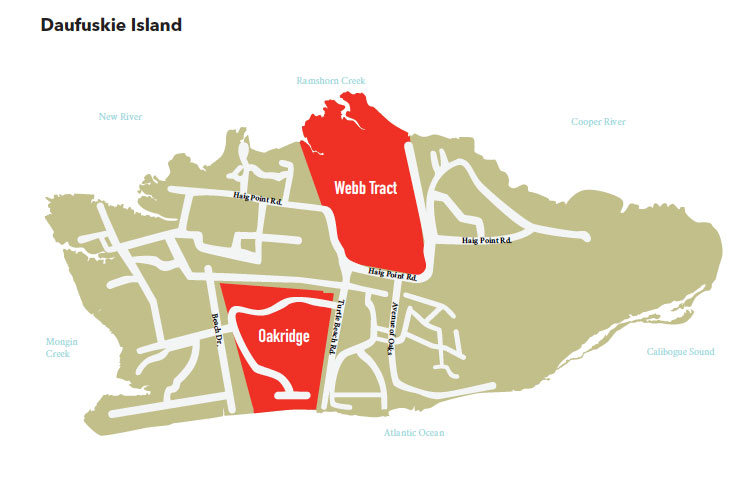 />Daufuskie is largely undeveloped and home to only about 400 full-time residents, who mostly live in golf communities. One of the biggest hurdles to further development on Daufuskie has been the lack of cost-effective and convenient ferry service, Freedman said. Members and guests of Haig Point Club have access to a water taxi that makes 16 round trips each day, but the ferry service open to the general public is limited to four trips a day and costs $35 a person.

Freedman believes these logistical issues have limited Daufuskie’s population growth — as well as its economy. With so few full-time residents, it hasn’t been necessary to open support services on the island like a grocery store, pharmacy, and urgent care facility. If he can follow through with his plan to build affordable housing on the island, Freedman said he thinks retail development would follow and the island would flourish. As evidence, he points to the success of other bridgeless islands on the East Coast, like Nantucket.

His vision for the new Daufuskie development also includes historical and eco-tour attractions, recreation opportunities, a “glampground” for “glamorous camping,” and other amenities and restaurants. Freedman says “America’s first ocean eco-resort” would be developed on the 365-acre Oakridge tract, offering unique tours, special events related to the area’s historical and cultural heritage, and an aerial adventure challenge similar to the ropes course and zip line facility at Broad Creek.

A company owned by Freedman’s Broad Creek Marina Holdings recently was permitted to build a ferry terminal near Haig Point Landing, and Freedman says his Broad Creek property is the only available location on Hilton Head with a convenient embarkation point to Daufuskie Island and ample parking to support the additional development on the island.

In addition to private investment, Daufuskie Island Development will pursue additional financing through U.S. Department of Agricultural loans that are meant to provide more than $60 million in financing for infrastructure, housing and business development in rural areas — areas like Daufuskie.

Freedman hopes to secure the financing to buy the land by the end of the year. If that happens, he said work on the project would begin immediately in hopes of completing the initial development within 18 to 24 months.

“(Affordable housing) is not a problem that we’re going to confront five years from now,” Freedman said. “It’s a problem that’s here now, and we have to find a solution.”