When the judges convene at the Hilton Head Island Motoring Festival & Concours d’Elegance, they’ll represent decades of automotive experience. Whether they’ve spent years judging similar car shows around the world or simply amassing their own collections of vintage vehicles, they know exactly what they’re looking for in terms of style, design and overall beauty.

But one judge will tower over the rest in terms of automotive cred, even though this will be his first time judging a Concours event. Knudt Flor, the president and CEO of BMW Manufacturing, has never been in the judge’s seat, but he knows a thing or two about automobiles. Referring to himself simply as an engineer, he’s worked for BMW for nearly 30 years in roles from quality management to technology.

“The judges are deeper in their knowledge of the brands, but I will be looking into the engineering precision and capabilities of what I can see and compare it to other cars that I know out of this time,” he said. “I’m looking forward to this.”

Oddly enough, the man who has lived and breathed BMW for most of his adult life has been asked to judge the Jaguar category. Will he hold the British supercars to the BMW standard? 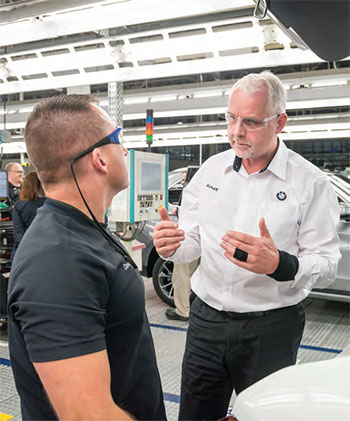 “To be honest, I think I cannot avoid this completely,” he said with a laugh. “Naturally I have a special standard in my head. … Great Britain had a very high technology standard at the time (these cars were produced).”

Flor’s rise to the president of BMW Manufacturing late last year saw him returning to Spartanburg. He first visited as part of the team that selected the city as the site for the automaker’s first plant outside of Germany.

“The production strategy of BMW is production follows market,” Flor said. “From this point of view, it was a natural decision to go to the United States because this was one of our big markets.” After viewing several sites in the U.S., BMW narrowed its options down to Nebraska or South Carolina, a decision made easier by Spartanburg’s proximity to the ocean’s shipping lanes — important because the plant receives roughly 15,000 sea containers a year — as well as the Palmetto State’s willingness to work with BMW on infrastructure.

“We said we need a road, a rail and an airport, and on top of this we had the advantage of the workforce from the milling industry,” Flor said. “This was a good starting point in this area.” Now, returning to the site he helped select, Flor heads up an industrial juggernaut that has reshaped South Carolina’s fortunes as well as revitalized manufacturing in the area.

“We’re engineers, so we love numbers,” he said before launching into the staggering statistics behind the Spartanburg plant’s impact on the state. All told, the plant represents an $8.1 billion investment. Include the 14 secondary suppliers that feed into the factory’s production, and the plant has created 30,000 jobs and had a $16.6 billion impact on the state’s economy. A statewide employment multiplier posits that for every direct job created at the Spartanburg plant, an additional three jobs are created elsewhere in South Carolina.

All told, the Spartanburg plant represents 89 percent of BMW’s $43.4 billion impact on the U.S. economy “It’s been a driver for the industrial development in this area and bringing back jobs into the country,” Flor said.

While BMW’s Spartanburg site has meant billions of dollars and hundreds of thousands of jobs for South Carolina, for Flor it has meant a chance to return to a state where this native German feels truly welcome.

“They do everything to make you feel at home. I think that is unique to this country,” he said. “I can tell you I lived in China for three years. This was exactly the opposite.”