Laurie Brown has always had a soft spot for helping people, particularly those with disabilities. When she moved to South Carolina from Michigan after 29 years of working for some of world’s top automobile makers, she jumped at the opportunity to launch her own business. She knew she wanted to create a company that could give back to the community by providing jobs, job training, projects and a sense of purpose to individuals with disabilities. 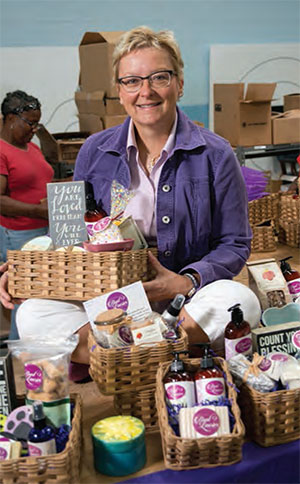 Laurie launched the Aunt Laurie’s online store in March, giving people nationwide the opportunity to purchase beautiful, high-quality themed gift sets with hand-crafted products that have been assembled by people with disabilities here in the Lowcountry. Gift sets at Aunt Laurie’s are skillfully hand-assembled by individuals with disabilities at the South Carolina Vocational Rehabilitation Department office in Beaufort, where workers gain tremendous pride from putting together each gift set according to a variety of themes perfect for any occasion.

All the items in every Aunt Laurie’s gift basket are hand-crafted by small businesses, with many of Aunt Laurie’s products made by businesses that employ those with disabilities, as well.   Brown has worked to form relationships with companies and organizations helping individuals with disabilities, including Lambs Farm in Illinois, Hilton Head Island’s Programs for Exceptional People, Extraordinary Ventures in North Carolina, Waggies by Maggie & Friends in Delaware, and New Mexico-based LifeROOTS, which all produce many of the gifts used in Aunt Laurie’s gift baskets.

Word is spreading about Aunt Laurie’s and how the company is reaching out to help others. And the company is continuing to grow. In addition to its online store, Aunt Laurie’s products and gift baskets can now be found in specialty shops throughout the Lowcountry, including Studio B Marketplace, Coastal Custom Floral Designs, Lynda’s on Calhoun and Make it Pretty in Bluffton, as well as Inspired Destinations in Ridgeland, the Ladyfish Productions online catalog, and The Gallery on Hilton Head Island. Purchases at The Gallery support women and children in need on Hilton Head. The company now also offers customized and personalized baskets and gifts, and the Park Lane Hotel, the Marriott and Sonesta Resort Hilton Head Island, as well as the Dataw Island Club and the Callawassie Island Club have put Aunt Laurie’s on their vendor lists.

“My goal in creating Aunt Laurie’s has always been to help as many people as I can, and to also bridge the gap between nonprofits and business,” says Brown, who, as longtime supporter of the work being done by Leader Dogs for the Blind, donates a portion of the company’s profits to the nonprofit organization. “Looking towards the future, I’d love to expand into opening a vocational-type training facility where individuals with disabilities can learn marketable work skills, gain apprenticeships/internships, or work on projects to help improve quality of life as well as feel more productive. Or perhaps even open a store or coffee shop where I could employ special-needs individuals. The possibilities for helping people with disabilities are truly endless, and I’m thrilled to be able to make a difference in so many people’s lives.”

For more information about Aunt Laurie’s and for a listing and description of the company’s gift sets and baskets, go to www.auntlauries.com.